The Chronicles of Inotia: A Wanderer of Luone is everything you would expect from a Korean based developer that makes RPG’s.  It has anime based characters,  bad translations and Diablo-esque gameplay.  If that doesn’t sound like fun to you then this probably isn’t your game.  If you don’t mind the above issues, the game certainly will give you hours of gameplay. 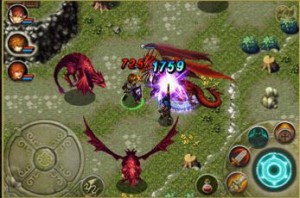 Let’s start by looking at the graphics which are actually pretty good.  The animations aren’t great but the actual characters themselves look pretty decent.  I would almost compare them to my all time favorite Japanese based RPG, ChronoTrigger, but I can’t quite make myself do it.  ChronoTrigger is a much, much better game.  Nevertheless, the character models aren’t bad and one nice thing is the models actually change depending on what weapons/shield you are carrying.  It’s a nice touch and something I didn’t expect.  The scenery and the backgrounds are all standard faire but that doesn’t make them bad.  For the most part, the graphics are clean and help the game.

The sound is very ordinary.  The music is your typical midi style RPG music.  The developers could learn a few lessons on how to build up suspense from the aforementioned SNES classic.  One nice thing is the ability to use your own music catalog for the in-game music.  What I decided to do was download the ChronoTrigger music into my iPhone and play them on repeat during the game.  That worked pretty well and gave the game a more epic feel. 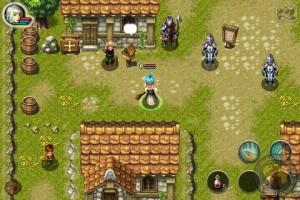 The controls are one of the weirdest things about this game.  There are two control modes.  A virtual d-pad which is what most games on the iPhone have been using and also a point and click control scheme.  Basically you hit where you want to go on the screen and your character walks there.  Neither is very good because the d-pad control tends to not pick up your movements and the point and click can get annoying because occasionally when you are trying to fight an enemy it won’t pick up your tap to fight.  You end up getting hit over and over again because your character won’t do any fighting until you click on each enemy individually.

The gameplay of Inotia involves fighting enemies in real time.  There are no cuts to a fight like you would find in a Final Fantasy game.  All fights happen when you walk up to an enemy (or they walk up to you) and begin hitting each other as fast as you can.  When your character “levels up” you are able to pick from several different special categories that will allow you to either hit an enemy harder or protect you better.  You are not able to pick specific stats for your character to level up in.  These special power ups have a regeneration time period that will allow you to use them again and again during battles after waiting a certain period of time. 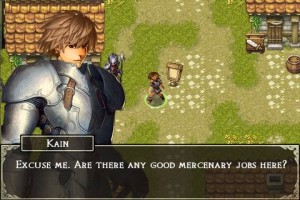 Besides the fighting there are also quests that a player can do through the game.  These quests are generally pretty bad.  For example, an inn keeper says to get him 10 wolf pelts.  Then after you bring them back he asks for you to bring him 10 more pelts of a different wolf.  After that he asks you to bring him 10 fangs… you get the picture right?  Boring level upping and quests do not make for an interesting RPG.  The main storyline doesn’t make any sense and isn’t really worth delving into.

It’s not all bland; you do have the ability to bring additional party members along with you.  These members can all have different abilities and you can level them up as you please.  It’s a nice touch for an iPhone based game.  There is also a multiplayer component that allows you to do one on one battle with other user’s characters that have been created and uploaded from the single player campaign.  The characters you fight are user based but automated by the computer but the random fights make for some fun times.  If nothing else, it adds a bit of variety to the game and allows you to unlock new items. 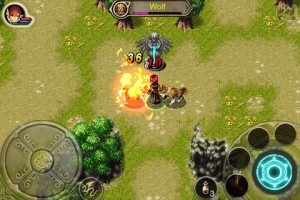 The Chronicles of Inotia: A Wanderer of Luone certainly does give you many hours of play time.  It will likely take you at least 10 hours to go through the storyline and do the side quests, maybe more.  For the price, that doesn’t seem like such a bad deal.  The unfortunate part is that this story was seemingly made for 10 year olds that play Pokemon Ruby (which is a better game by the way) and has no problem falling into the same old RPG pitfalls as many games before it.  If you aren’t looking for anything original and just want to hack and slash your way around a map for hours at a time, then this game is for you.