I would start by comparing this game to several older arcade games that have similar gameplay but I think many of my readers are simply too young to remember them.  Instead I’ll just start by setting the scene for Scribble Pilot.  Doodle Jump graphics (see here for review) meshed with space action shoot-em-up gameplay.  The end result leaves this reviewer wanting more of the same. 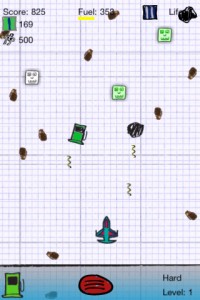 The gameplay involves you taking over a space aged jet fighter and going into space.  Instead of being able to fly around in whatever direction you want to like you would find in an Asteroid type game, you use the angle of your iPhone/iPod to fly faster or slower depending on how much you slant it forward or back.  To fly left or right, simply lean your device in that direction.  On the bottom of the screen is a shoot button and the rest of the screen has an overlay to show important information.  Things like fuel, number of rounds left, points scored, etc.

Standing (flying would be a more apt word I guess) in your way are asteroids, alien crafts, space aliens, space bombs and most substantially an alien “mothership” for each level you go through in the game (after the first two levels the motherships will be re-used but have additional weapons and powers).  All of these alien scribbles are very well done.  They scale from being ridiculously cute or quite nefarious in appearance.  One of the green monsters that fires continuously at you has a huge smiley face and looks like am cloud flying around.  It’s almost makes you sad when you have to fire your blaster cannon and annihilate it.

Graphically the game is everything you would expect from a doodle or scribble based game.  All of the graphics in the game have been hand drawn.  The background of the game looks like a notepad and most of the object designs are creative and pleasant looking.  The sound in the game isn’t bad at all.  There isn’t really any music to speak of until you get near the alien ship at the end of a level.  At that point, you will hear some very ominous music that sets the mood.  I wish there was more of that type of thing but overall, the graphics and sound fit the game very well. 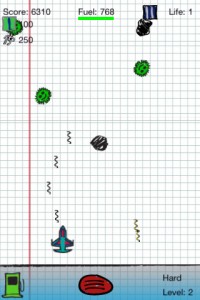 The game gives you 3 or 4 weapons to use to destroy the alien/asteroid death being hurled your way.  It would have been nice to have a few more options but overall the weapons given have a fairly satisfying feel.  The same holds true for the multiple things you need to account for as you fly forward.  Namely, not only are all of these alien space objects flying your way ensuring you are constantly on alert so you don’t get hit but you also need to keep track of how many fuel units, bullets, and lives you have left.  In order to refuel or re-load you need to put yourself in front of fuel or bullet canisters that will fly towards you.  Of course to do that you need to dodge or kill the objects in the way.

In my playtime, I was able to get myself to number 9 on the top OpenFeint player list.  Of course this game was just recently released so I imagine I will fall down the list quite quickly.  However, I did have one irksome moment in the game.  I was up to about 26,000 points or so – good enough to be very close to the top person on the OpenFeint community list and I still had 2 lives left.  Suddenly I received a phone call and the game quits (like you would expect).  However, when the call was over, the game loaded back up and the menu for the game was there instead of my ongoing high score shattering game.  Argh!  If there is one thing I wish every developer had in their game was the ability for it to save automatically before you answer a phone call.  This in no way is a game killer but was a frustrating moment. 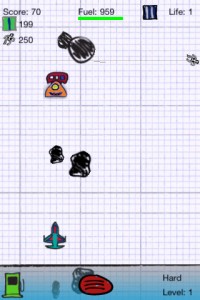 Scribble Pilot has everything you would want out of a time killer.  It gives you interesting gameplay, pleasant graphics, a competitive sense to try and get a high score (thank you OpenFeint) and in general is very well made.  In the future I would love to see this developer add some achievements that you can earn to its OpenFeint community page along with having some system of saving for when a call comes in.  The bottom line is that if you are looking for a casual game where you get to fly, shoot things and try to beat my number 9 rank in OpenFeint – this is the game for you.