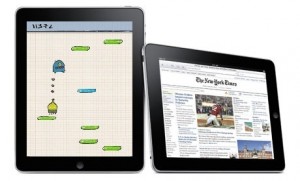 I’m worried.  One of the best parts of the App Store is that small, indie developers are able to make a huge impact when it comes to the gaming landscape.  They are able to do this for a number of reasons.  First, the iPhone/iPod Touch is fairly easy to develop for when compared to a PC or a Mac. Everyone is using the same operating system and system specifications.  Secondly, many of the large developers are just now dipping their feet into the mobile platform.  This is especially true when you compare EA’s smaller offerings on the iPhone when compared to consoles.  When they begin marketing full on, I believe there will be less room for indie developers to make an impact.  Finally, the reason a game like Doodle Jump can be developed in 2 months by 2 guys is because there are not a ton of fancy graphics.  Fantastic gameplay and creative graphics but minimal graphics all the same.  When the iPad comes out and you are able to see a game like Doodle Jump on a 10 inch screen, what will you see?  A substantial amount of space being underutilized and cute but simplistic graphics.  A game like Doodle Jump may have no place on the iPad.

How is a puzzle game or Stickmen Wars supposed to compete with a company like EA’s game lineup when it comes to graphics?  They have no chance. The iPad seems like it is all about graphics.  Everything is pretty.  Everything is cool.  The iPhone is a perfect size for indie developers because even the best looking game still isn’t larger than 3 inches.  I know there will still be a market for indie developers on the iPhone and iPod Touch; a huge one.   But when I see a smaller company talk about how they are excited about bringing their scribble game to the iPad, I wince.  I just can’t imagine those games will be popular on the much larger iPad screen.  Then again, I could be wrong.  What do you think?