Marble Multiball 3d – The Castle Adventure is an iPhone/iPod Touch marble rolling maze game set in a spooky castle.  To tell you the truth, a marble maze and spookiness seem like a strange pairing but the setting doesn’t really detract (or enhance) the game.  The game revolves around you going through a series of levels (over 40 in total) and guiding your ball or balls through different types of mazes.  The game utilizes the built in accelarometer and requires no on screen buttons to play.  The end result is a game that is simple to play, difficult to master and frustrating at times. 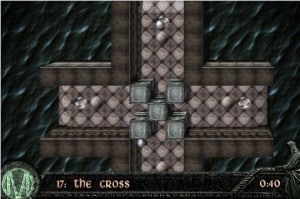 It is hard to write about a maze game without mentioning Labyrinth, one of the best selling iPhone/iPod games out there.  Its physics model is outstanding.  The ball rolls convincingly along the path and it really feels like you have one of those old toys in your hand rolling a ball around.  This game doesn’t feel quite like that.  Instead the ball rolling physics feel a bit off at times.  It is hard to say what exactly is the cause of that to be the case, but I felt that way the entire time I played it; almost as if the balls were slicker than they should be.  One of the innovations in this game is that certain levels have multiple balls (up to 8 in some levels) that you have to roll around on the screen and deposit in the right location.  The sides of the map differ greatly from water to space and generally are ways of keeping you on a single path and making the game more difficult.  If you fall off the map, you start over from the beginning.  The difficulty of the game begins getting insane in the latter stages.  Even on the easiest difficulty level, in the last 10 or so levels, it takes the world’s steadiest hand in order to maintain the ball on the map and make it to the end. 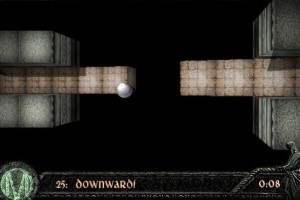 The difficulty is both good and bad.  I like that the difficulty ramps up progressively as you jump through levels but there is no way of skipping a level if you can’t pass a map.  You must beat it in order to go on.  I think this is a poor design choice.  Game developers should want the majority of players to beat their game.  Otherwise, why create the latter levels at all?  I think that a LOT of people will give up before they make it to the end of this game and that’s a shame because some of the latter stages are some of the most innovative.  You have no controls of your balls vertical movement.  You only control the balls speed of descent.  There are occasions where you can ramp your ball over space or water and “jump” to another platform which is nice but very difficult to control.

The graphics in the game are ok but nothing special.  The aforementioned marble rolling game, Labyrinth 3D, looks quite a bit better than this one.  That being said, this game has a larger scope and the maps add in water, castle walls, multiple balls, etc that aren’t included in Labyrinth 3D.  The sound in the game is annoying after a while.  Especially after replaying a stage 20 times or so before you pass (this happens often in the latter stages).  I turned it off.  Annoyingly you cannot play your own music while playing the game which to me was a disappointment. 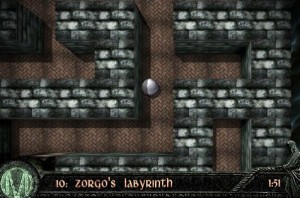 Overall, the game really has its ups and downs.  Passing a level after making your ball slalom down a hill, and speeding up and slowing down in order to “jump” channels of water is a lot of fun.  But the 40 times I failed the level wasn’t much fun at all, just frustrating.  The controls feel a little slick and when you are playing a game that relies entirely on accelerometer controls; it really makes the game all the more difficult if they aren’t up to par.  If you’re a huge fan of marble maze games, try this one out (there is a free version as well).