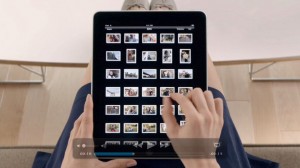 Yes the 3 hour commercial, I mean the Academy Awards, were on last night.  You may or may not have heard that the Apple iPad had its first primetime advertisement on during one of the Oscar’s many commercial breaks.  That ad, which can be found below, didn’t have anything to say but did have a lot to show.  A set of hands flip it, hold it, and change apps for about 25 seconds.  During that time period they show a guy and a girl laying down, sitting down, putting their feet on a table, on their head (not really) but pretty much in a million different positions.  Am I the only one that thinks that is weird?  I think they were trying to prove how comfortable it is to use but instead it looked really uncomfortable. 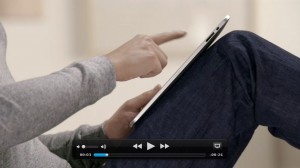 That’s not the only thing I noticed.  In a 30 second ad, they made 21 separate cuts in the video.  I know this is an advertisement but even so, 21 cuts seems a few too many unless you are trying to hide something.  Perhaps the fact that these people just couldn’t get comfortable.  I mean seriously, their legs were all over the place.  Nothing shows comfort like constant fidgeting.  I’m mostly joking but I do find it funny that the thing they showed in the background was constant leg position changes.  Especially when a lot have people have mentioned this thing not being that comfortable to use.

The music they used was There Goes My Love by The Blue Van.  I swear that sometimes bands make music entirely on the hope that Apple uses them in advertisements.  It wasn’t rock, alternative or emo, it was the genre of Apple.  Just watch the video and you will hear what I mean.  The lyrics work perfectly for an iPad song too.  “Please, please my naked wrists, With your hands and fingertips”.  I can’t think of anything more pleasing then getting carpal tunnel from writing too many iPad emails.  Just kidding.  Mostly.