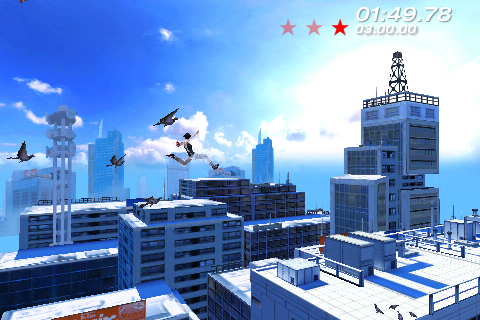 Mirrors Edge, one of the most underrated games of 2009 will soon be making its way to the App Store.  Not only did the console/PC game have an unbelievable amount of style (and one of the best original musical scores ever), it also brought a whole new style of play to the gaming world.  The iPhone/iPod Touch version looks to continue that effort when it is released in April of this year.  EA’s recent media release announced a couple of new details which are listed below.  It’s hard to not think of a side scrolling, jumping game without mentioning Canabalt, but the graphics and style that are shown in the screenshots speak for themselves.  We here at iPhone Gamer Blog are really looking forward to this one.
For a pretty amazing sample of what I think we will be seeing, check out this link which will allow you to play an online version of Mirrors Edge 2D – http://mirrorsedge2d.com/ 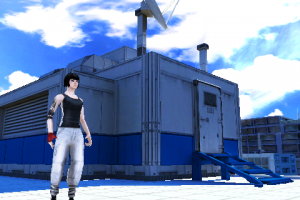 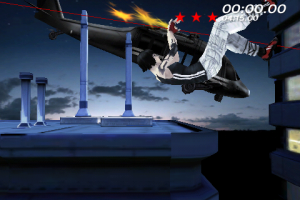 The award winning and the most dynamic action adventure game comes to iPhone™ and iPod touch®.

In a city where information is heavily monitored, where law is brutally enforced, where most people sacrifice freedom for a comfortable life, there are still those that choose to live on the edge. Take control of Faith, a member of an underground group known as “Runners”, acrobatic messengers who are the last source of free communication in this “perfect” city. But a deadly threat has grown from within and Faith finds that she alone is the one that can stop it.

EXPERIENCE THE WORLD OF MIRROR’S EDGE –

A place where information is heavily monitored and law is brutally enforced in an effort to create the ‘perfect’ society.

YOUR MISSION -Take control of Faith Connors, a member of an underground messenger group known as Runners, as she races to stop a deadly threat that has grown from within their own ranks.

SURVIVAL OF THE FITTEST… AND FASTEST –

Use Faith’s incredible acrobatic moves to outmaneuver the enemy –run on walls, slide down precarious ramps, ride ziplines, and leap between rooftops. Leave the enemy in your dust.

EDGE-OF-YOUR-SEAT EXCITEMENT – Burn through 14 levels of the fastest, most fluid action imaginable. Dynamic camera angles capture the intense action of this unique game.

HEIGHTEN YOUR SENSES- Immerse yourself in a stylish, graphically rich 3D environment flooded with realistic sound effects and phenomenal music.