Final Fantasy made its way to the iPhone and iPod Touch world late last month.  This version is based on the PSP game of the same name, not the NES version from 1987 (1990 US release).  Without a doubt there have been a tremendous number of advances since its first iteration.  I’ll skip the story and the pretense.  If you’re reading this review you know all about the series and how popular it has been.  You probably are already playing Final Fantasy 13 on a console if you have the $60 to put down.  It is worth noting that this review, just like any other on this site, will give you an honest opinion based on the value and replayability compared to the other RPG’s on the App Store, not just based on its nostalgic worth. 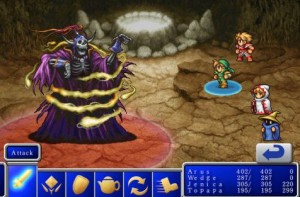 You and your 3 posse members, otherwise known as the warriors of light start out on a quest to save the world.  As in most RPG’s, this is done through a series of quests and chats with NPC’s across the world map that help you on your way and give you new quests.  You use the virtual stick to do pretty much everything in the game world.  Unfortunately that is one of the game’s main issues.  For a game that lasts well over 10-12 hours, you have a virtual joy pad that is entirely stiff and difficult to use.  Every direction seems to take 2 taps on the stick and making sure you are directly in front of an NPC in order to initiate a chat is a pain.

The controls during the battle sessions are even worse.  In fact, one of my annoyances with the Final Fantasy series has always been the random battles.  Here you have the same amount of battles but they take even longer to play through.  This is due to the fact that instead of hitting a single button that auto targets your enemies like on every version before, you have to manually pick the exact enemy to target by touching them on the screen.  Again, it is a small thing on the larger scale but when you literally have 1000’s of battles over the course of the game, it becomes an annoyance too large to overlook. 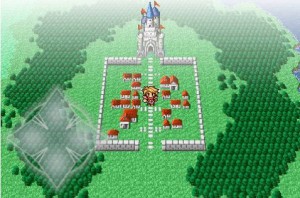 The same fun storyline is otherwise here.  If you liked the storyline on the NES, DS version and/or the PSP version of Final Fantasy, you’re going to like it here as well as it is virtually unchanged.  One nice thing is that this version adds in the additional dungeons that the PSP added to the original game.  This helps extend the game an extra hour or two.  The graphics have also been upgraded tremendously since the NES version.  They look great on this version of the game. The sound within the game is also excellent and includes the famous background music you know and love. 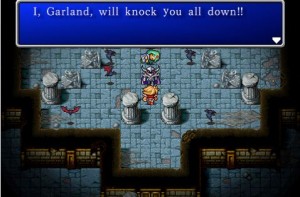 If you have never played a refurbished version of the Final Fantasy series but have played other RPG’s on the iPhone/iPod Touch, you’re in for a bit of feature shock (as in a lack of features).  There is no easy way of figuring out where to go on the large game world, there is no list of quests that you have enlisted for and there are a multitude of other things that many modern day RPG’s have that Final Fantasy lacks. 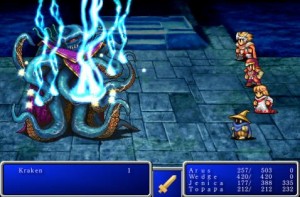 All of that being said, it should be mentioned that the nostalgia of playing a classic game 20 years after its initial release is pretty wonderful.  Is that feeling worth 9 dollars?  Not in my book.  I would rather save the money and buy Inotia 2 or Zenonia 2 when it arrives sometime this spring. However if you can deal with its control issues and the old school RPG feature set, and have not purchased the PSP version already, you might risk the cash.