The iPhone 4G/iPhone HD – Not Coming to Sprint, Maybe Verizon 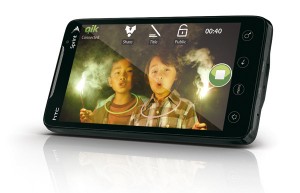 With Sprint’s announcement yesterday of the first 4G phone stateside, the new playing field was set.  Offering much higher download speeds, the HTC Evo 4g, is the first 4G handset that has been announced by a major US carrier.  The phone itself isn’t half bad either.  A Google Android-based OS with a 4.3 inch screen, a Micro SD card slot that’s capacity is up to 32 GB, and an 8.3 megapixel camera make it a formidable foe.  How does AT&T and more importantly, Apple respond?

Well one thing we already know is that AT&T has no plans of rolling out a 4G network anytime soon.  While Sprint will have coverage in 27 major US cities and availability for about 120 million people by the end of 2010, AT&T is still working on filling the holes in its 3G network.  In fact, according to several reports, AT&T is still about 1 or 2 years out on unveiling it’s 4G LTE coverage.  Where does that leave AT&T’s stud, the iPhone?  Probably someplace that Steve Jobs would prefer not to be.

4G networks push data out about 5-10 times faster than 3G networks.  That’s a significant difference and coupled with the general increased usage of wireless networks, is sure to push any network to its limits; especially during the rollout period.  The next iPhone is expected to be announced either later this year or early next year.  Would Apple rather stay the course and stick with AT&T or is it finally time to break free?  I think it will all come down to one thing; when will Verizon announce the rollout of their 4G coverage?

Verizon is the key factor in all of this.  The reason being, they have the biggest network in the nation and AT&T has their share of problems even supporting the older 3G protocol.   If Verizon’s 4G network could launch with the iPhone at its side, it would be huge for both Apple and Verizon.  But if the new iPhone is ready to go and Verizon’s 4G network is nowhere in sight, maybe Apple will stick with AT&T.  After all, while the new iPhone may be 4G or HD (if you would like), it will likely still support the older connection speeds that AT&T offers as well.

There are a lot of questions but one thing seems sure.   Any new Apple iDevice will not be offered to the Sprint market.  Since Sprint has rolled out a 4G handset first, they also will have the most bandwidth being used when the new iPhone comes out.  I don’t think any network can rollout something brand new like 4G and be able to take on anything more than the iPhone market.  It’s just too large.  The good thing about all of this, it doesn’t look like it will be long until everyone’s wireless network is a little bit faster.  The bad news; your phone bill is sure to rise as well.