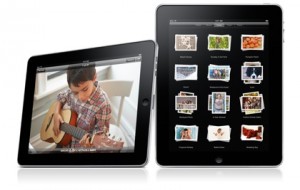 Since the launch of Apple’s iPad officially occurs in several days, what better time to start ramping up the media feeding frenzy for the second iPad or what I like to call, the iPad 2/HD/4G.  What kind of new functionality will the iPad offer in 2011?  Will it add a camera, add flash or even add a regular keyboard?  We take a tongue in cheek look at what will happen over a year from now.

In 2011, the first iPad will likely have worldwide acceptance.  In fact, it’s likely that the PC market has fallen on hard times.  Regular Joe’s like you and me have taken the iPad for what it is; an extremely cost effective way of manipulating the digital world.  With Apple’s announcement of the iPad 2, the 35 million strong base of first generation iPad users begin readying themselves for the unveiling of the second generation.  At the announcement, Jobs has a list of things to talk about.  First off, they will no longer have any type of Google interface built into the device.  No Google Maps, no Google search.  Jobs goes on to say that this will better serve the general public because Bing has become the best search engine/data collector in the world today.  Of course what he doesn’t say is the real reason they eliminated Google from their iPad is that Google will be releasing  a direct competitor, the Google Book, to the market in the next month or so.

He continues by mentioning that the device will now have a camera and will allow for iChat.  The crowd trembles with excitement.  He mentions that due to the new way they are creating the processor and the cost of all of the hardware becoming cheaper, that the iPad will start at the tremendously low price of $499.  The interesting side note is that the costs have come down so much in the last year that the actual costs associated with creating the second generation iPad are about $150.  At least that would have been the case before Apple added in the Titanium casing they are using for the iPad 2/HD/4G.  That adds in a whopping $50 per unit but it’s worth it because ‘it is gorgeous’.

Before moving on, Steve Jobs mentions how the 500,000 apps that are currently on the App Store are about twice as many as the Google Android store has.  Of course that is true but what he doesn’t mention is that the number of apps on the App Store has slowed while the number of Google Android apps has grown exponentially.  Developers have moved to the Android store due to the fact that there are many devices to sell to and the openness of the store model.

The huge feature everyone is talking about, multitasking, is finally announced to applause throughout the crowd.  In fact, when the crowd hears that the iPad 2/HD/4G will have multitasking, many in the press jump for joy.  What Jobs doesn’t say is that the multitasking will still be limited to two programs and each program will need to go through a special vetting process to be allowed to use the multitasking ability.  After all, the stability of the hardware is of the utmost importance.

Finally things are slowing down a bit at the conference.  Jobs, in his stereotype of a wardrobe, all black with a turtleneck and tennis shoes, tells the crowd one last thing.  “I have one piece of bad news I have been ordered to announce to the crowd due to SEC implications.  I have been terminally ill for the last year and doctors expect me to only have a more year to live.”  A cloud hangs over the conference attendees as they filter out through the hall.  Apple’s shares take a tumble due to the expected loss of their Chairman and Google buys up Apple for half of what it was worth just a few months earlier.

If you’re waiting to find out how this story turned so morbid in the end, just remember that today is April 1st.  I couldn’t possibly allow Jobs to have the happy ending you all were expecting for the release of the iPad 2/HD/4G.  That being said, I wish only the best for this new device that arrives in 3 days and wish no ill whatsoever to Mr. Steve Jobs, a visionary in his own right (despite the visionless wardrobe).