Zenonia 2 is the epic follow up to last year’s widely acknowledged iPhone/iPod Touch RPG of the Year.  Suffice to say the expectations I had as someone who loved the first version were at an all-time high with the release of the sequel.  The emotions I had while playing Zenonia 2 were all over the place.  The action is epic, the story is crap and the gameplay is fun.  These things combined added up to a pretty great gaming experience with just a tinge of disappointment. 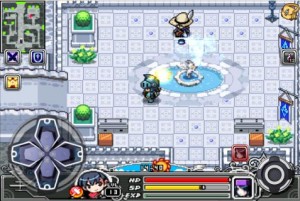 The game immediately hits you with a ridiculous story that kills your expectations (don’t worry, it gets better).  You choose to play one of 4 characters, all of which have their own characteristics and more importantly, their own strengths.  Lu is a paladin, Ecne is a shooter, Morpice is a magician and Daza is a warrior.  If you’re still stuck on wondering about their four names, I don’t blame you.  They have to be some of the absolute worst choices for character names I have ever seen.  Nevertheless, don’t get stuck on the names.  Throughout the entire story, they stay just as bad (one old man is named Monica…Monica!) and there is no way to change them (like you would find in almost every other RPG from 1990 and onwards).

Despite the story, when you get into the action of taking your character into the gaming world, you are likely to have a great deal of fun.  The atmosphere is fantastic and lends itself well to the RPG mentality.  Every town you visit has a variety of missions that’s variance helps keep the action off pace and interesting.  From find and fetch missions to kill and level missions, you will have a great deal of options to choose from to improve your character.  While none of the missions are near as interesting as something on Dragons Age: Origins, that’s ok.  What is here, works well. 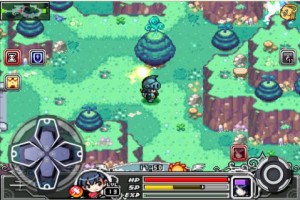 A major part of playing this game is leveling your character and your fairy (which works like a pet might in a traditional RPG).  Throughout this leveling process, you will be killing respawning monsters and gaining experience and gold along the way.  In some portions of the game, this can become ridiculous to a fault.  Sometimes the monster you just killed will respawn in the exact place you are standing killing or at the very least, injuring your player.  That kind of thing gets pretty annoying after a while.  Another issue arises when you go to an area you are obviously not ready for.  I have occasionally arrived at a boss fight or even basic monster that was impossible to kill.  I found out later on that the reason was I was nowhere near the level I needed to be in order to finish off that character.  Finding out in retrospect can be annoying at the least and deadly at its worst.

The game adds in some variety to the basic item buying economy you see in many RPG’s.  Much like Harvest Moon, you will find ore deposits throughout the world and be able to mine them and keep what lies inside.  Early on, you are able to find basic things like copper and iron but later on in the game you are able to find advanced elements like thorium and magical ore.  You can take these items to the local blacksmith and if you have the right recipe in your arsenal, he can make you some pretty great weapons and armor.  This kind of crafting is a nice touch and works well to differentiate Zenonia 2 from some of its iPhone/iPod Touch competition. 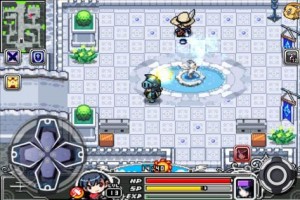 Another interesting thing you can do in Zenonia 2 is play a distinct type of multiplayer.  Basically the computer takes control of another player’s avatar and does his best to kill you with the stats and items that player has gained in his single player quest.  In the matches I played, I had fun but my Paladin character had a heck of a time trying to beat magical characters.  It just didn’t seem like a fair match-up.  My hope is that the multiplayer component of Zenonia 2 is updated in a future update (Update: according to a few Twitter updates, this is already being worked on by Gamevil).

Zenonia 2 is unparalleled in its scope, wonderful in its detail and has a story that is annoying as hell to try and understand.  Despite its flaws in its storyline, this game is a gem and worth the cash.  My dream is to have the same developers come back for a 3rd edition and make sure that they get some alpha and beta testers that grew up with English as their native language.  Nevertheless, if you loved the first one, you’re going to find this one even more of a treat for your senses.  If you like RPG’s in general, this one is heads above the competition and blows a game like Final Fantasy away.