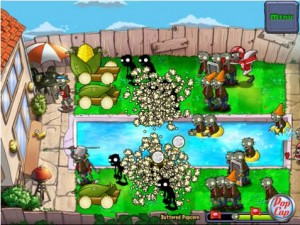 One of our favorite games of the 2010 (a 5 out of 5 review), Plants vs. Zombies, makes it way to the iPad at release.  Take a look at the information presented by the developer below.  A few specific things stand out including a new minigame and updated high resolution graphics.  This one is sure to be a sure fire hit as it will even be closer to the PC edition.  Feel free to buy this one right away without reading or our upcoming review.  I have a feeling this one will be a no-brainer, especially if you haven’t already purchased the iPhone/iPod Touch version.

PopCap Games, maker of some of the world’s most popular video games, today announced its Plants vs. Zombies™ HD app for iPad® is now available on the App Store. Since its introduction on the iPhone™ and iPod® touch in February, Plants vs. Zombies has sold more than 650,000 units. With this latest adaptation, PopCap is propelling the Plants vs. Zombies franchise to new heights – delivering even more great gameplay and exclusive features tuned specifically for iPad. The Plants vs. Zombies HD app for iPad is available for US$9.99 from the App Store on iPad, or at:  www.itunes.com/appstore/.
“The iPad is a fantastic platform for gaming, and Plants vs. Zombies HD allows us to show off the great new features and functionality of this exciting device,” said Andrew Stein, director of mobile business development at PopCap. “In this adaptation, we’ve focused on the iPad’s Multi-Touch capabilities and opportunities for new gameplay like the Buttered Popcorn mini-game that will excite both new and current players.”
The Plants vs. Zombies HD app for iPad offers all 50 levels of Adventure and QuickPlay modes as well as Survival mode from the original Apple Macintosh and Windows PC game. It also includes four all-new achievements (for a total of 17) and 18 mini-games, including Buttered Popcorn – exclusive to the iPad – offering frantic and fun gameplay where players attack zombies by first “buttering” them up before firing corn-cob cannons at them. To defeat the growing hordes of zombies, players can touch them to place butter on their heads. With the Multi-Touch user interface, players can select up to eleven zombies at a time, targeted for “buttering” by the powerful cob cannons. The game’s non-stop action is presented in full 1040×768 resolution, delivering stunning visual effects rarely seen in mobile gaming.
Originally launched on the PC and Mac in May of 2009 to universal acclaim, Plants vs. Zombies was introduced for iPhone and iPod touch earlier this year, where it quickly became a global phenomenon. The game reached the #1 position on the App Store Top Grossing charts in more than 20 countries worldwide, including the U.S., Canada, China, Russia, Australia, Germany, Denmark, Ireland, and Norway.
No votes yet.
Page load link
Go to Top