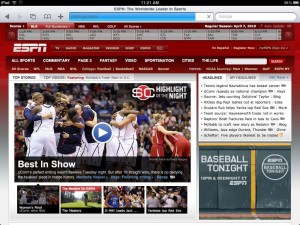 Now that I have had the iPad for a few days and have gotten the chance to really spend some time with it, I have come to some conclusions and some assumptions.

The battery life is crazy good! I fooled around on YouTube for over an hour and only used 4%. I didn’t even have to charge it for the first couple days. With that said, it doesn’t charge as fast as my iPhone but that is totally understandable with the size and endurance of the battery.

The screen, oh my, it is my favorite part of the iPad. The HD screen is so vibrant and brilliant that webpages I look at every day look new to me. On a side note, I am already sold on the upcoming iPhone HD because of the HD screen. I can only hope it’s not only for Verizon.

Espn and Facebook work flawlessly using Safari. No need for an app for either one. I can’t stress enough how amazing webpages look on this screen (yes, I am writing this on the iPad). My main concern about Safari and websites is that some sites recognize the iPad as a mobile device and send you straight to the mobile (and usually lame) version of the site. I hope there is something on the horizon that will solve this issue.  (Editor’s note: Typically this site by site thing as it is their site that determines what devices to show the mobile version by default.  It is likely that in the future sites will recognize the iPad as being different and thus select their normal website instead of the mobile version).

As you probably know, iPhone Gamer Blog is mainly a game review website with a few exceptions. My concern with the iPad is that I am not sure games are going to take off. As of right now they are expensive and somewhat hard to play due to the size of the iPad. I think some handheld based games aren’t going to work. The iPad is just too wide to hold and play with just your thumbs.

On the other hand, maybe developers will figure out a way to get around traditional handheld games and create a new genre of games that will make the iPad a gaming device in its own right.

As of right now I am playing We Rule (add me as a friend, joshlcox) and Thumpies XL, both are impressing me so far. We Rule isn’t a traditional handheld game so it works well with the large screen. Thumpies, is a “tap to the music” game so thumbing to the beat becomes, typing with all fingers to the beat. 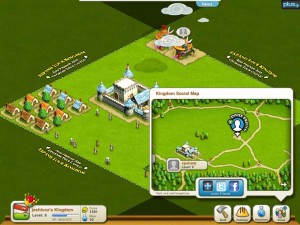 All in all, I keep getting more impressed the more I use my iPad.  That being said, my next article will focus on my not so favorite things about the iPad.