Tony Hawk Pro Skater 2 may be 10 years old but it is still as fresh today as it was then. I remember playing this game with a joy pad on my PC for literally hours at a time. Every last thing has been reproduced in this iPhone/iPod Touch version from the graphics down to the same Punk/Ska/Rap music that was used upon initial release. Suffice to say, this all leads to one conclusion. It’s good. 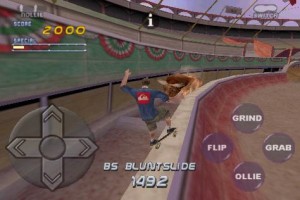 Activision didn’t do anything fancy when they reproduced Tony Hawk 2 for the App Store…except for making it feel perfect. The controls’ timing is fantastic. Despite the difficulty of doing a 580,720 McTwist/ random skater jargon, everything feels perfect. In other games that try to mimic the controls of a hyperactive console or PC game like this on an iDevice, things feel delayed and the controls don’t work at all. This game sets the new standard for controls on a virtual screen. They have simply made all of the on screen buttons on the right side and the directional controls on the left feel exactly like a gamepad. In other words, this game feels like it was made for the iPhone/iPod Touch. 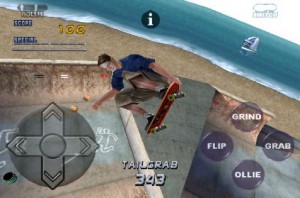 The graphics have held up over the years as well and feel like a great fit on an iDevice of any type. Sure they aren’t up to 2010 standards for a skate game on a PS3 or XBox 360but they sure look nice and smooth on my iPhone 3GS. In fact, I never had a single slowdown in the many hours of play time I spent with this one. The sound fairs a little worse. The soundtrack was never very good on this game, at least for my ears, and it hasn’t improved. That being said, you can turn it off if you would like.

The PC game had tons of ways of earning money and having fun on each level. Fortunately, that has stayed the same as well. You can unlock separate hidden sections of each level if you know where to look and each level has a unique way of earning new money. One military based level asks you to collect eagle wings scattered throughout the level while a school based level has you ring school bells. Each area is drastically different from the next leading to a tremendous amount of replay value. Unfortunately there are no achievements built into any social networking platform like Open Feint. Instead it uses old school single player achievements and high scores. Nevertheless, they are handled better than most games handle rewards. 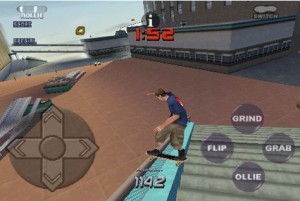 Money that is earned can be used to unlock new boards, new levels and even experience points. The experience points allow you to take a character of your choice and level them to a master level skateboarder. This multifaceted earning system fits perfectly into the career mode and makes things a lot of fun as you progress. 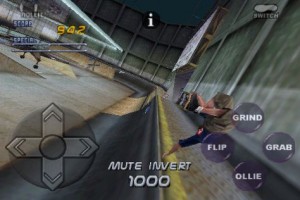 While this game is a bit pricey, it is without a doubt worth it. The smooth controls, the great graphics and overall fantastic gameplay fit perfectly on an iPhone or iPod Touch. It is worth mentioning that if you are looking for multiplayer mode, you need to look elsewhere. That being said, playing with (or by) yourself has never been so fun.