Opera Mini Browser Review for the iPhone and iPod Touch 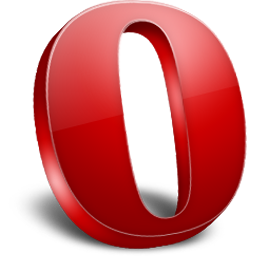 In a surprise move, the Opera Mini browser became the first 3rd party browser ever accepted by Apple onto the App Store.  Up until now, iPhone and iPod Touch users had just one choice for a web browser (unless they were jailbroken).  Now that I have had some time to take it through its paces, I have enough information to tell you that it is a mix of both good and bad.  Unfortunately the bad is caused entirely by Apple. 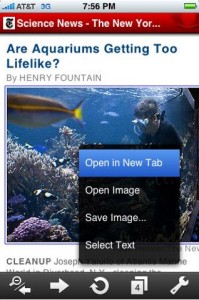 Opera Mini is fast.  Much faster than the default Safari browser that is built into the Apple OS for the iPhone and iPod Touch.  Before the browser’s release, there were already news reports that it would load up pages faster and those reports are entirely accurate.  The browser uses a different method to process complicated and detailed content web page content.  On the EDGE network, I found the Opera Mini browser to be almost 2 times as fast as the Safari browser.  It does that while having an interface that is equally as quick.  You have never seen a back and forward button work so fast.

That being said, actually reading articles on this device is a pain.  The reason: Apple doesn’t allow for any 3rd party App Store software to include pinching in and out to zoom in and out.  Apparently they consider that motion proprietary and don’t give developers the ability to use it whatsoever.  Opera came up with a workaround of sorts.  Instead of pinching to zoom, you simply double tap the screen in whatever location you want to read.  That works for some pages but in others the text is simply too wide and you will literally have to scroll both vertically to move down the page and horizontally on every single line to finish a sentence.  It is a damn shame because other than that, the browser is heads above the Safari browser. 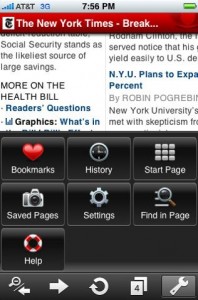 It has additional features as well that are pretty sweet.  One is called Speed Dial.  It allows you to take 9 pages and make large links that you can click on to open them directly instead of going through a bookmark process.  You even have the option to use a find mechanism on each page you are on.  Looking for a specific word?  Simply use this feature to find that word throughout the entire page.  In my opinion, this is a feature that is sorely lacking from Apple’s default browser. 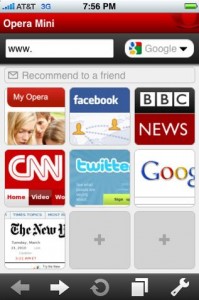 Despite the scrolling problem, if you are in a place that constantly gets thrown on the EDGE network; you are going to want this browser as it is simply too fast to pass up.  However, if you normally are on either WiFi or the 3G network, you won’t notice the same speed increases and the scroll problem is really going to bug you.  It’s a shame that Apple cripples developers in this way but at least they didn’t reject the app entirely.  No matter what, this free app is worth a try.