Chaos Rings is the first game that Square Enix has ever specifically made for the iPhone and iPod Touch platform.  This is no port from a game that was made 20 years ago (I’m looking at you Final Fantasy) that was then ported to the DS and then again to the iPhone.  Instead, it’s an entirely new story, characters and world that one of the largest names in gaming has created for our favorite platform.  Our review is coming in a little bit later than a lot of the other major iPhone and iPod Touch gaming websites.  I really wanted to take some time to play through this thing in full (something other review sites may not have the luxury of doing due to time restraints) and see if I could get a good feel for it’s worth. 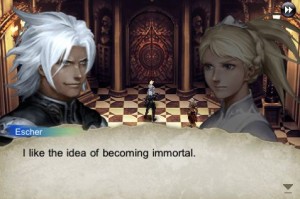 You see, this game costs $13.  The most any mainstream game has ever cost on the App Store.  First, that means that Square Enix thinks there is a market for a game at that cost.  Right now the game is the top grossing app on the App Store so it looks as though they may be right.  Secondly, that means it has to be the best game ever released on the App Store.  After all, what’s the point of paying more for something that is not?  I don’t want to burst that bubble too early but this game is clearly not the best game ever made for the platform.  That being said, don’t write it or me off (for writing that it is not) just yet.

The game’s story begins with a group of 10 people waking up in a strange castle.  The dialog is fairly well done.  The general theme is that no one knows where they are but they do know that the person sitting/standing right next to them is their arch enemy.  You soon find out that they are warriors that have been brought to the castle from across the world to fight (sounds like Mortal Kombat, right?).  The ironic thing is that before they can fight each other to the death, they have to cooperate with their arch rival in order to complete several tasks. 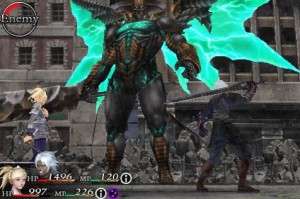 Honestly, the story isn’t bad at all.  In fact, considering most of the other stories we have come to know on the iPhone and iPod Touch, many of which come from developers that don’t speak English as their native language, this story and dialog is heads above the rest.  However, one of the issues with the game is that it is not your standard faire RPG.  Instead it heavily (and I do mean heavily) revolves around fighting over and over again.  There are some brief puzzles thrown in here and there but overall there are no towns, no side quests, no NPC’s waiting to talk to you at the local saloon, etc.  It simply isn’t that kind of RPG.

As I mentioned, fighting takes the forefront of everything you do in the Chaos Rings world.  That means that you still have the standard faire random fights that you never see coming and you will have lots of them.  Need to backtrack to an area?  I hope you like fighting an extra four or five battles because random battles will pop up everywhere. 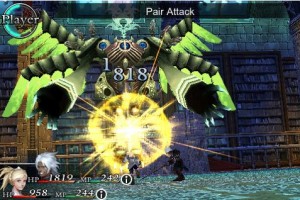 The fighting itself has been done in a fairly common way.  You have 2 characters to fight with throughout most of the game.  You have the option of attacking using just one of the characters or pairing your attack and attacking the enemy together.  You also have the ability to use gene pools for magic attacks.  Genes can be gathered from your fallen enemies.  Each of the genes has several different abilities and each of your characters has the ability to use 3 genes (and a fourth human gene that cannot be changed).  I do like this system, although it can be a little confusing due to the fact that some animal genes have the same traits as others.  You have to constantly micromanage the genes you are using to ensure you aren’t duplicating traits (for example, the healing trait).

The actual fighting itself can be a little mind numbing after a while.  For a game that last about 6-8 hours, almost the entire time will be fighting.  Personally, I am someone that likes a little more talking in my RPG’s but your mileage may vary.  Fighting works by picking your target via the touch screen and selecting how you would like to attack the enemy or multiple enemies.

There are maybe 10 different enemies that you will find throughout the world.  Honestly, one of the worst things about the fighting system is that you need to continuously defend and heal yourself in order to make any progress at all against some enemies.  Especially early in the game where your hit points only add up to 800-900 points, some enemy attacks will take out 300-400 points at a time.  That seems a little high and can cause you to be killed many times if you’re not careful. 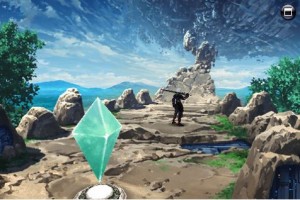 The game does have multiple bosses that you will fight thrown into to each level.  These boss  characters are usually truly epic in size and should put the fear of god in you.  It’s nice to be able to see the size difference and realize how powerful the boss character are before you even begin your attack.

As far as buying and selling items, you will find a store that allows you to purchase upgraded weapons, armor and a few items.  However, don’t go in expecting a full range of armor – your character has 3 things they can use at any given moment during a battle – a weapon, armor and a necklace.  Other than that, you’ll be using a lot of healing potions and other one-use items.

So now that I started with some of the issues that you will have with the game, let me give you the goods on some of the great things about it.  The graphics are the first thing you’ll notice in Chaos Rings.  All of the characters are in 3D and the 2D backgrounds are varied and beautiful.  Each of the character models have defining traits and overall you will find this to be one of the most aesthetically pleasing games on the iPhone or iPod Touch. 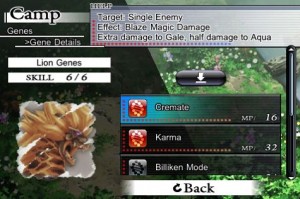 The music is truly epic as well although you really shouldn’t be surprised.  Thankfully music has always been treated with respect by Square Enix and you will find the same type of beautiful flowing music that changes depending on the type of situation you are in Chaos Rings as you will find in Square’s other games.  As far as the rest of the sounds within the game, they are less memorable.  There is no speaking, instead there is simply captioned text throughout.

Finally, the controls have also been nicely done.  You can flip the iDevice either way you would like to and once you get it where you like it, you can lock the screen so it won’t flip.  The virtual stick on the left of the screen simply shows up and works wherever you touch your left thumb.  It’s a nice touch and the virtual stick can easily allow for the finesse of allowing you to slow down or speed up your character depending on how far you move the stick.  Considering the difference between the awful controls of the Final Fantasy ports to Chaos Rings, you can tell a lot of work has been done here and it is appreciated.

One thing is for sure, this game is a premium product.  The graphics, music and overall polish are ahead of most of the pack on the App Store.  That being said, there are some games on the App Store like NFS: Shift and GTA: CW that have been just as good or better, yet cost less.  If you’re an RPG fan and you’re looking for a new series to peak your interest, Chaos Rings isn’t a bad choice.  However, if you are someone that relies on NPC’s and side quests to keep your curiosity peaked; Chaos Rings really won’t fit the bill.