The buzz around the soccer loving world’s premier event, the World Cup, has never been higher.  In just over a month the first games will be played in the South African event.  If you are ready to take part in the action beforehand, you are in luck.  FIFA World Cup 2010’s release means you know have the ability to take your country of choice to the promise land.  How does this game’s gameplay stack up against similar soccer titles on the iPhone and iPod Touch platform?  Actually, quite well. 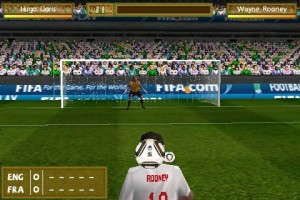 Upon loading the game you have the ability to do a variety of different things.  The game includes 3 main modes that we will talk about here.  In the World Cup mode, you simply pick a team (in this case a country) and decide how far into the tournament you will begin.  At this point you’ll begin playing out your matches in the hope of winning it all.  You also have the ability to play in a mode than allows you to create a player and attach yourself to your country of origin as their captain.  It’s called Captain Your Country.  This mode allows you to only control one player on the pitch (US readers – pitch means field), yourself.  Each game gives you increased abilities and as you’re on field stats increase, so do your ratings. 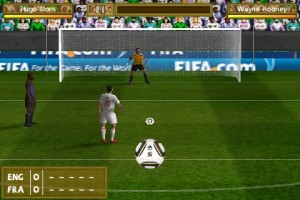 The final mode we’ll talk about is multiplayer.  The game gives you the ability to play against other people who own the game in the same room.  In my tests, this mode linked up well and was a lot of fun to play.  It would have been nice if EA would have made a central server that you could have accessed competition from across the world (since it is the World Cup), but the local Wi Fi and Bluetooth options are nice as well. 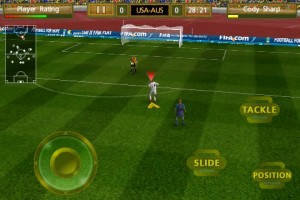 The actual gameplay is very similar to EA’s last FIFA release for the iPhone and iPod touch.  If you haven’t played that version, the controls and graphics are both fairly nice.  While you will see quite a bit of repetition from the cutscenes that are shown throughout, the actual stadiums and players in the field look nice and fluid.  The sound within the game has been revamped for the better as well.  The commentators now add new dialog other than endlessly just saying the player’s last names upon him receiving the ball.  All in all, the overall presentation of the game has been increased a bit over FIFA 2010. 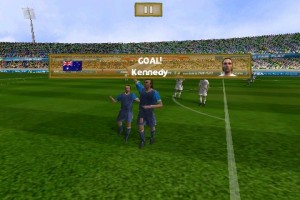 The controls have also been improved a bit as well, although not as noticeably.  While you are on defense or offense, you have the ability to press three buttons.  On offense you can pass, shoot or use a special move.  On defense you can slide or tackle and if you are playing in the Captain Your Country mode, you can also have the game position your player correctly.  All in all, the controls work well and the virtual stick has a good feel to it. 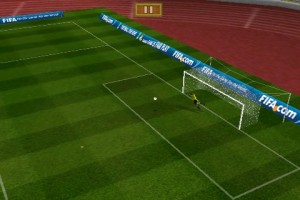 The new game is a must have for World Cup fans everywhere.  All of the player’s are licensed and the presentation is among the best I have seen on the iPhone or iPod Touch for any type of sports game.  The Captain Your Country mode gives players the ability to personally lead their team to victory.  One thing worth noting is that I did find this mode to be a bit easier than it should be.  It would be nice if in an update, EA makes this mode a bit more difficult for FIFA 2009 iPhone and iPod Touch veterans.  All in al though, if you’re a soccer fan, you won’t be disappointed in this outing.