A test of reflexes, speed, and hand-eye coordination, Hand of Greed is a vicious game of jewel collecting, as spinning blades, traps, and explosive orbs threaten to keep your grubby hands out of the cookie jar. Loaded with plenty of puzzling timing challenges, this one keeps you coming back for more, as the levels become increasingly difficult, to the point of near frustration. Broken down into five worlds with ten stages for each, Hand of Greed probably isn’t something you’ll be taking down in one sitting. 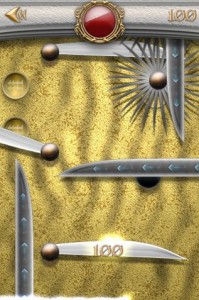 For $0.99, it’s pretty tough to demand extravagant gameplay or graphics from the developer, as long as their title sustains interest for a reasonable amount of time. Each stage consists of a number of waves where you must collect all the jewels while avoiding the varying obstacles scattered throughout the screen. Your precious hand can only withstand three hits before perishing though, and with health gems being difficult to find, timing and caution becomes an increasing issue as the game progresses. While the early going starts with just one blade spinning at an even pace, by the third world you’re hurdling around triple-edged blades spinning in opposite directions at varying speeds, with projectiles shooting around the screen from multiple angles. In other words, it gets insane.

The graphics are fairly standard for a puzzle game, with a variety of gems ranging from yellow triangles and opaque spheres to purple pentagons and gold circles popping up on the screen for your greedy finger to collect. Each world has its own background layout, ranging from grey stones to lush greenery, as the timer bar swiftly burns down across the bottom, with your health represented by a glass container of blood at the top. For each slice or explosion absorbed, the screen flashes with a light smattering of red blood, almost forcing you to instinctively pull your hand away, which is easily my favorite visual effect in the game. 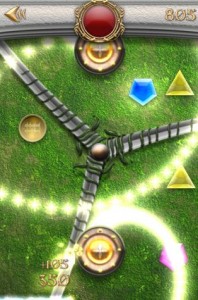 Hand of Greed’s soundtrack consists of essentially three songs, one for the opening screen and menu, and two others for most of the in-game action. They’re capable of becoming repetitious, but after the first few levels, the action becomes intense enough to distract you from the background music. Either way, both songs fit the game fairly well, with one sounding like it belongs in a Transformers episode, circa 1986, and the other smacking of Indiana Jones influence. For each gem successfully snagged, a nice little chime sounds off, and for each skewering by one of the razor sharp blades, a sword-like metal clashing effect.

The action through Hand of Greed is lighting quick, but sometimes almost approaching the level of mind bending aggravation. Quick fingers are absolutely necessary to even survive through the first world, with each one stepping up considerably in difficulty. If your hands are coordinated enough, the control is highly responsive, although sometimes the explosive orbs in the Lush World tend to go off whenever they feel like it, while others choose not to. 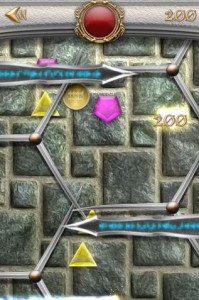 Fast gameplay, action, and a progressive level system allows Hand of Greed to hold your attention for a while, although I could definitely see some players becoming overly frustrated after a few stages. The music could’ve been a bit more diverse, but I’m not about to demand a ten song soundtrack from a 99 cent game. If you’re seeking a fun, fast-paced puzzle game for limited cost, Hand of Greed has potential, but just don’t expect to breeze through the levels without much effort.