Galcon Fusion is single and multiplayer strategy game where you use your planets and ships to take over other nearby planets.  To control a planet you must fly ships from one of your current planets to another planet not currently under your control. Once you have taken the planet over, you can use the ships on that planet to take over another planet and so on. 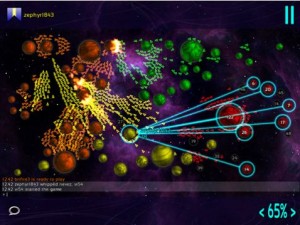 Larger planets hold more ships and produce ships faster, so taking control of big planets early is a smart move. To transfer ships you must tap on the planet that you would like to take ships from and then tap on the target planet. You can select multiple host planets by tapping them in a row, then selecting a target. To select all of your current planets double tap any planet that you have ships on.  If you have sent a fleet of ships out then release you need them somewhere else, you can tap the fleet and redirect them by selecting another target. Also, the number in the bottom right of the screen is what percentage of ships you send out from each planet. You can flick that number left or right to change it. The in game controls are quite easy and simple to learn.

There are 8 single player modes. A few of them include Vacuum, Stealth, and Assassin. The Vacuum missions are timed based games where you must conquer all of the planets before a timer runs out. The Stealth missions are tricky. You cannot see the enemy’s fleets as they attack your planets. With the Assassin missions you are assigned targets and must conquer all of the target planets to end the game. As the game goes on, if your target enemy grows, so does the number of targets. 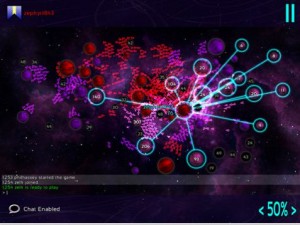 The multiplayer games are the same as I described above plus a few additional modes like Billiards, where the planets float around. The multiplayer aspect of Galcon Fusion is very well done and playing people around the world via WiFi is just a touch away. The interface is pretty easy to understand and there is virtually zero load time. You pick your game and opponent and boom the game begins. The multiplayer is a lot of fun, but I really got crap kicked out of me the first few times I played.

Visually, Galcon Fusion seems to be right down the middle. The graphics aren’t stand out great but aren’t bad either. The ships are just little triangles and the planets are swirling balls of color. I understand that to have more detail on the ships would probably bog down any good desktop, let alone an iPad, but I wanted a bit more. The audio is on the same level as the graphics. The sound FXs are mainly popping noises from your ships hitting planets. The background music is dark and menacing which actually fits the color and style of the game. Although neither the graphics nor audio really caught my fancy, they are a good fit for the gameplay. 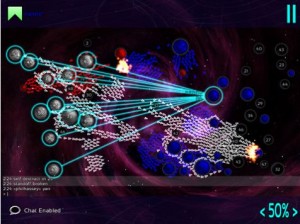 Galcon Fusion is a fun and slightly addicting game, but at $7.99 it’s an expensive one. If it weren’t for the multiplayer aspect of this game I would say this game is a no go, especially for the price. But, if you’ve liked what you’ve read and can spare the $7.99, go for it. The game is fun and there is an endless amount of gameplay with the multiplayer feature. And don’t expect to win the first time playing online; some of those players are serious gamers.