Extreme sports and skateboarding sim enthusiasts, brace yourselves; as the revolutionary console game has finally been adapted for your mobile device. Realistic graphics, authentic skaters and brands, and a 12 song soundtrack are just some of the items to look forward to in the latest Electronic Arts iPod title. Using a similar control system to the console version, Skate It relies on a “flick it” system for tricks, which is highly unique, but not exactly the easiest thing to master. 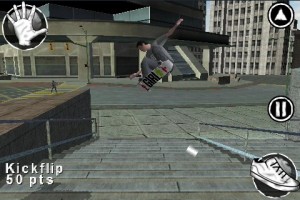 With 20 levels, fully customizable characters, career mode, and a smorgasbord of nearly every skate trick imaginable, the value on Skate It is almost off the charts. Sure, it carries a heftier price tag than the latest puzzle game, but you’re paying for one of the most detailed games out there. The career mode is similar to the console version, with a variety of challenges including photo and video shoots, races, and contests which must be completed to unlock new levels and extra treats.

While creating your Skate It persona, literally everything from facial features to sneakers can be manipulated to your heart’s content. Over time, a bevy of skate gear, from wheels and trucks to hats and hoodies becomes available after conquering the many challenges littered throughout each level. Want a Mohawk haircut with slick shades and camouflage shorts? You got it. Looking for a smarter look, such as a cardigan, fitted hat, and jeans? No problem there either. Nearly anything you dream up can come to life, and you haven’t even started skating yet! 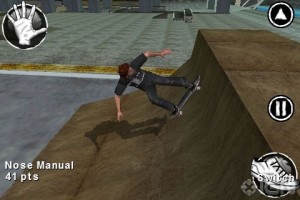 Faster paced sports games can survive or fail based on their graphics and animation, which EA paid plenty of attention to while piecing this one together. Each trick is rendered well, with lifelike speed and physics while riding a half pipe or launching off a ramp, risking life and limb to pull off that elusive 540 back flip Christ air. The glitchiness and problems don’t rear their ugly faces unless you wipe out, which can have your character falling through the bottom of the level, or somehow becoming one with a handrail. The levels remain fairly complex and true to the original, and while you can’t skate freely on the streets to each area, there’s more than enough here to keep you busy for hours on end.

You can practically hear the trucks being ground down to a nub while grinding on rails, or the urethane wheels crashing against the hard pavement while shredding the streets of Skate It. The sound quality is well produced, but still fairly simple as most of the effects are quick and intermittent. An easy highlight is the soundtrack, which you can freely cycle through and jam to bands like Suicidal Tendencies, Gang Starr, The Gaslight Anthem and nine others.

Up to this point, I was wholeheartedly satisfied by the realistic physics, decent soundtrack, and nearly endless game content, but once you start picking at the control system the wheels begin to come off. To perform a trick, a unique flick technique is required, which can be anything from a straight line to a nearly impossible four sided shape for more advanced flips or grabs.

Similar to the console version, this takes some getting used to, but has a tendency to become highly frustrating, especially since some of the more intricate challenges are basically impossible if you can’t pull off higher level tricks. Steering and spinning relies on tilting the iPod, which is pretty responsive, but occasionally almost too sensitive. Grabs can be even tougher, as they require pressing the grab button, then immediately flicking to tweak it, which can be confusing to say the least. 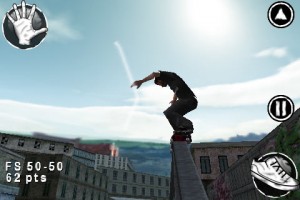 There’s no shortage of levels, special guests, or impressive moves in Skate It, as EA maneuvered carefully along the path of adapting a complex console title into a compact, mobile version. Of course, control can become a potential issue since you only have a touch screen instead of an eleven button controller with two joysticks and a d-pad. However, I became agitated numerous times with the trickier flick sequences, which can drive you mad during a skateboard version of Horse. I suppose you could chalk some of this up to user error, but there are definitely some wonky things afoot when it takes about 50 tries to finally nail down a laser flip. While it’s not perfect, Skate It is a decent skateboarding title which has the potential to become awesome, but only if you’re able to wrap your fingers around the elusive control system.