Buy it. This is an awesome game, think Mario Galaxy 2 but two dimensional and on the iPad. Soosiz is a platform based game where you play as a little orange circular character traveling through different worlds saving your friends and hopefully the world as you knew it before the “Evil” came. Like all platform based games, Soosiz involves a lot of jumping around, but the cool thing about this game is the platforms have gravity and you can jump in any direction and stick to another platform (kind of like they are little planets). 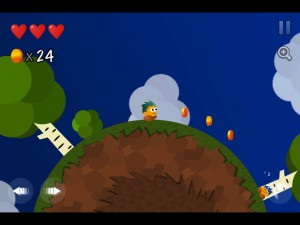 As you travel through each level you will have to dodge the “bad guys,” they consist of spiky mushrooms, spiky bushes, rolling rocks, rotating fire balls, and spikes. Honestly the game has a very strong Super Mario Brother’s feel but I think that why it’s so much fun. You will come across your little orange friends during the levels, some will give you special powers others will just tag along and follow you to the end. Although you do not have to find all of your friends to finish the level, your reward at the end depends on how many you find.

The graphics are fantastic; simple, but vivid. The developers at Touch Foo knew exactly what they were doing. Soosiz has tons of gameplay; there are seven different worlds, each with nine levels. That’s 66 total levels! Each world has a different visual theme including underground, ice, water, and space just to name a few. For as simple as the graphics are they are stunning for a 2D game (similar to World of Goo). The music is right on par with the graphics. There are a few background songs on this game that I really like. My sister, who’s not a gamer, played Soosiz for about 20 minutes this weekend and as soon as one of those songs started, she commented on how “cool the music is”. 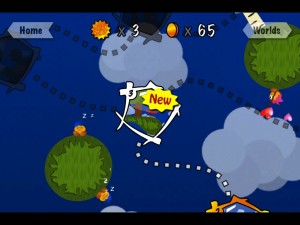 The controls are also great. Touch Foo came up with ways to incorporate all the aspects of motion and touch to facilitate some type of controls throughout the game. The standard controls are button based touch controls. Left and right buttons are on the bottom left on the screen and the jump button is on the bottom right. There is also a pause button and zoom out button (that allows you to find your friends and the level ending portal) on the right side of the screen about half way up. There are a few special timed levels that you must gather blue coins as fast as you can. This is where the developers used the other forms of control like the accelerometer. For example, during one blue coin level you must tilt the iPad left or right to make your character move. 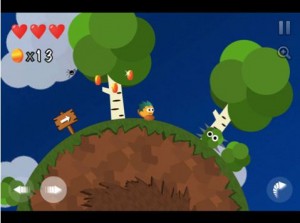 This is one of the best iPad games I have ever played. All of the aspects of the iPad are used to bring this game together. The HD screen shows off the high quality graphics. The accelerometer and touch screen help give this game the vast array of controls. Kudos to Touch Foo for using the entire iPad experience to create such a great game. At $1.99, this is an absolute no brainer.