Yes, believe it or not, we are all about to enter the world of another tower defense style strategy game. For some reason, a stupefying amount of these games keep popping up around the iPhone gaming market, each with unique themes, weapons, and villains. Utilizing a number of twists and turns, each developer strives to strike gold with the next successful title, and Bio Army appears to be on the right path. 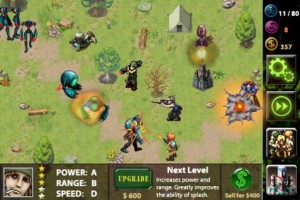 You’ve constructed the towers to battle against the evil monsters in Tap Defense. You’ve successfully prevented the alien invaders from stealing your sheep with an arsenal of ray guns in Tower Madness. Even after that, you still felt the need to battle the armadas in 7 Cities. So why bother with Bio Army? From the moment your callused index finger touches the screen, it becomes apparent that the value on this game is practically off the charts. Of course, some similar strategy games might be free, but they don’t quite stack up to the amount of options, weapons, scenarios, and characters overflowing from Bio Army.

With 15 maps, 7 soldiers, 5 game modes, and multiple unlockable features and upgrades, Bio Army will keep you busy for hours, especially if you’re into this genre. The difficulty increases considerably during each level, pitting your soldiers against a host of monsters, robots, and other foes. Compile gold, build new units, and prevent the enemy from reaching home base, which costs you one life each time. 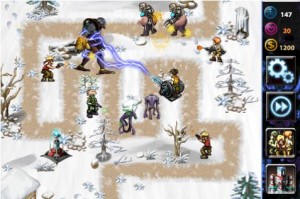 Each map features its own theme, which ranges anywhere from parched deserts to icy tundra. The villains rigidly march down their path as your army fires their weapons during increasingly heated battles. However, Bio Army’s animation is a little choppy at points, and seems to forgo some of the well rendered 3D graphics delivered in competing titles. Also, when using the more basic infantry troops, it’s sometimes tough to determine exactly where and who they’re shooting at.

DigiRabi spent more than their fair share of time creating the sound for Bio Army, which includes a varied soundtrack with different songs for each map and an assortment of effects. The pop and crackle of machine gun fire sprays across your enemies, while appropriately themed tunes play on in the background. During the opening titles and menu, a pleasantly epic song reminiscent of an old Final Fantasy VII boss battle powers from your delighted speakers. The only head scratcher here was the decision to allow some soldier’s weapons crisp effects while others remained silent.

There’s some minor quirkiness when trying to place your units on the battlefield, which can result in dropping them on the wrong space, or having to reselect and drag your finger to the appropriate location. When battling some ultra fast flying monsters, this can easily become bothersome, and since it’s really one of the only necessary controls in Bio Army, it’s a definite issue. 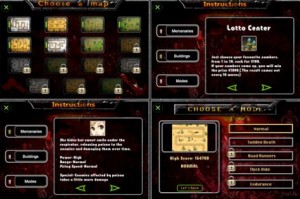 While not without some puzzling inconsistencies and a few odd control decisions, DigiRabi has presented us with a decent strategy defense game. The rapid escalating difficulty might be slightly frustrating, but the levels are by no means impossible. Unique enough to stand out from its competitors, and with a veritable boatload of upgrades and options, it’s tough to beat Bio Army for a $0.99 game which is actually worth your time.