Like reliving the games of the past in all of their pixilated glory?  If so, Trucker’s Delight may be for you (or maybe not).  In the same vein as Outrun or any other racing game from the late 80’s/early 90’s comes the newest game from Mobigame.  Truckers delight has one twist to the standard driving/racing game – your character is set in hot pursuit of a very attractive girl who flipped him off after he made an advance.  Your duty, as a redneck truck driver, is to chase her as long as you can and continue to hit her car from behind.  Because nothing shows how manly you are like running your 16 wheeler into the back of a suped-up sports car. 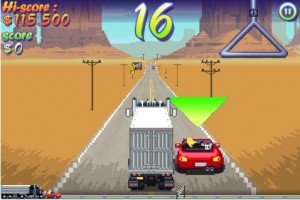 Those of you looking for a deep gaming experience will absolutely not find it in this game.  In fact, it has one of the shallowest premises I ever seen in a game.  That being said, if you are hoping to get a lightning quick glance of some 1980 style video graphic boob, you are in luck.  There is at least one power-up that allows you to lick (no I’m not kidding) the clothes off of some large chested females as you pass by them in your truck.  After licking off their clothes you are rewarded with an amazing 1 pixel per nipple graphic of them being thrown in the air (seriously, I couldn’t make this stuff up).

Despite the horrible graphics and stupid storyline, perhaps the game could be saved by good gameplay.  Unfortunately you won’t find any of that here either.  Basically as you drive down a road, the oncoming cars continuously increase in number and you need to continuously make a 30 second timed checkpoint in order to continue.  You won’t ever catch your prey, but you will get close to her after every checkpoint.  Once that happens there is nothing to do except for to run your truck into her car four or five times and then like a bat out of hell, she’ll simply drive away from you- until the very next checkpoint.  Then she’ll slow down because she enjoys getting hit from behind (get it?). 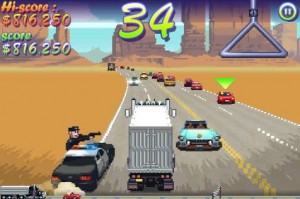 The game comes off trying to be a mix between a game like Outrun or another older racing game mixed with Leisure Suit Larry type antics.  The end result is a game that is not satisfying on either front.  The driving aspect is extremely boring after a few minutes and there are only 3 power-ups available.  The power-ups don’t even seem to be randomized.  Instead you get them in the same order every time (one every one or two checkpoints). 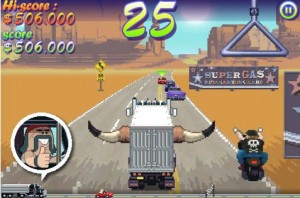 If you’re a 10 year old looking for a little cartoon nudity, this game might be for you.  Otherwise if you’re an adult, make sure you’re really drunk before firing this one up because otherwise it’s likely you won’t have any fun with it.  At $2.99, this game is a must pass.