Low priced, seeming endless randomized game content, multiple challenge modes, and a bouncing hero by the name of Leo all for $0.99? That’s just some of what you can expect from Jump O’Clock. With his magnetic boots and super jumping ability, Leo climbs the endless clock tower while avoiding fire, blades, steam, and other obstacles. An entertaining and possibly addictive title, Glu Mobile ratchets up the value with their latest game. 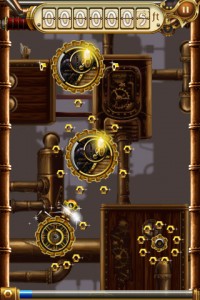 While cruising the iTunes Store for new games, it’s not always easy to discover a low priced game capable of holding your attention for longer than about six minutes. With the endless waterfall of free games loaded with obnoxious ads and inexpensive ones which serve about as much purpose as a farting app, customers are becoming shrewder by the day. The developers hit the nail on the head with Jump O’Clock, as the tower climbing is endless, and randomized so no level is ever the same twice.

As Leo bounds his way skyward through the clock tower at your behest, the detailed background is filled with gears and other machinery. Each cog rotates in different directions, some while moving vertically or horizontally, requiring specifically timed jumps to avoid falling to your doom. During regular play, collect enough nuts to charge up the super jump, and watch Leo vault hundreds of feet with one click of the button. There isn’t anything particularly spectacular visually, but rather solid, basic graphics that get the job done. 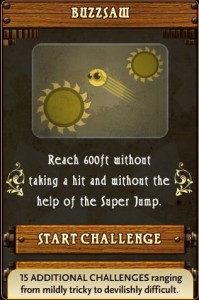 During the titles, menus, and game play, Jump O’Clock keeps the music playing with barely any gaps. There’s a constant flow of tunes and sound effects, which appropriately fit the game without looping the same 30 second track over and over. With each leap towards your goal there’s a smacking sound after each successful jump which lands you on the next cog. When colliding with spinning blades, a flash of metal on metal sears through the speakers as Leo falls off the gear.

There’s very limited amount of control while playing, which seems to work to this game’s advantage. You’re free to press anywhere on the screen, which signals Leo to take his next jump. The whole game is based around timing, so whenever you fail a challenge or fall off the clock tower, you only have yourself to blame. 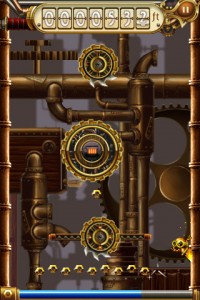 Glue Mobile created a decent, inexpensive title with just enough content to keep players interested and attract more fans. If you’re looking for 3D graphics and visual fireworks, this isn’t really it, but they offer mobile gaming enthusiasts more than enough for the $0.99 price. Take control of Leo and begin your journey through the endless clock tower; you will not be disappointed.