Tunes Attack! is a, you guessed it, music based top to bottom scrolling game that uses your music from your own library.  The music affects the speed and amount of obstacles for each level. There are three mini games that make up Tunes Attack!, and you can either play them one at a time or play the Career Mode which incorporates all three of them. 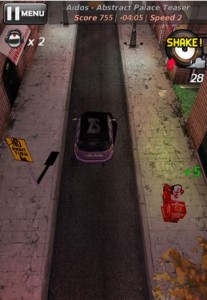 The mini games consist of a three modes; Scooter, Concert, and Space. There is also a two player mode but I’ll get to that later. The mini games are not related outside of the Career Mode, and even within that mode the story line is ludicrous just to get them to come together.

The Scooter mode is basically you being a pizza delivery boy and you have to drop off pizza while dodging cars, signs, trees, and other scooters. The music, if fast paced, will make this a very difficult level. The faster the music, the faster the oncoming traffic. I found this incredibly challenging the first few times I played it. 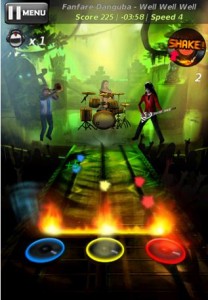 The second mini game and perhaps the best is the Concert mode. This mode takes any song you have uploaded and turns it into, for the lack of a better comparison, Guitar Hero. You are given three spots to tap when the appropriate note passes over. I really liked this mini game; it’s by far the best thing about Tunes Attack!  This is also the only mode that is available for two players.

The third mini game is the Space mode, in which you pilot a spaceship and shoot meteors, trash, alien ships, and aliens that look like speakers. Space mode is much like the Scooter mode. Obstacles come from the top of the screen and move down.

The Career mode, believe it or not, actually takes the three mini games and with the use of a crazy story links them together. Each level is six minutes long. If one of your songs ends during those six minutes a new song starts right up.

The graphics are below average. The story line graphics are worse than the gameplay graphics. The story line is set up like an old Nintendo game where a small picture of the person who is talking is at the bottom of the screen. The sound FXs are annoying. Since you use your own music, I can’t really complain about that portion of the sound, but when you crash your scooter, miss a note, or crash your spaceship the music gets warped then slowly regains normal tempo. 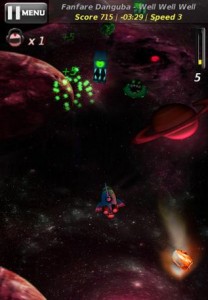 All in all, I think Tunes Attack! is a great concept for a game or multiple games. I think that the developers tried to cram too much content into one game when with a little more work and refinement there could easily be three separate titles. Something that I couldn’t figure out is that when you are playing and manage not to crash you earn a “speed up” that makes your move quicker, which makes you more likely to crash and lose. Once I stopped using the “speed ups”, I beat the game.  Good concepts, but it just didn’t turn out to be a good game.