Who remembers the Super Nintendo and arcade classic, F-Zero? This is what immediately bubbled up from my childhood memories as soon as I started playing Phaze, which expands upon the futuristic racing title with fast paced action along curvy tracks while snatching power ups and battling against rivals to capture first place. Fire missiles, drop bombs, and hit boosts to reach blistering speeds capable of making your eyes tear. The concept is certainly there, but did Handmark, Inc. truly deliver? 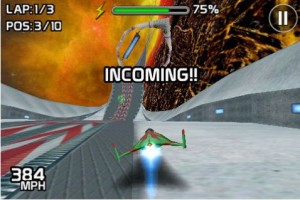 With 16 levels, 4 difficulty settings, 10 race crafts, and 6 weapons, Phaze certainly makes a valiant effort to live up to the $2.99 price tag, which is by no means extravagant. Fully rendered 3D graphics and the option to create your own soundtrack raise the bar even higher, and the game continues to expand as you play. So far, so good, right?

It’s not until further examination that the flaws within Phaze start to become apparent. The lack of a radar map to track your competitors is baffling, as is the tendency for your ship to crash into the wall and quickly explode, especially before you unlock the upgraded vehicles. Also, it feels as if the start and finish line isn’t as clearly marked as it could be, especially when previewing the track during course selection. 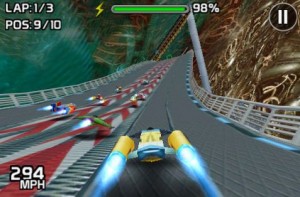 The animation and graphics are practically liquid smooth, rolling off the screen as you barrel through the courses at speeds reaching nearly 1000 mph. Chock full of backgrounds, clouds, mountains, and starry skies, each level has its own unique feel. The vehicles emit blue and purple trails while accelerating, growing larger as you hit boosts and roar past the competition. After completing a circuit, the camera rapidly rotates 360 degrees around your ship as it begins a victory lap.

Loaded with pulsating techno beats and electronic sounds, Phaze delivers an appropriately futuristic soundtrack to fit the game’s motif. The effects are plentiful as well, with high pitched acceleration, blasting missiles, booming explosions, and frantic alarms alerting you of incoming attacks. This is all great, but my favorite piece is the ability to disable the audio and play music from the iTunes library. While this seems like it should be an obvious feature, there’s far too many games which don’t utilize a similar system.

There are some quirky issues with the control, but most of this is remedied with practice becoming easier over time. The options menu allows you to adjust the sensitivity, as acceleration, speed, and turning are all dependant on tilting the device in different directions. Tilting forward speeds up, backwards slows down, and so forth, with the iPhone flashing red if you go too far. The system works fairly well, but when approaching higher difficulty levels and later challenge levels, it can become tough as nails to avoid bursting into a fiery inferno against the barricade, or losing control of the ship. 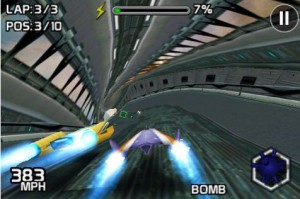 Although not without a few pitfalls, Phaze is a quality racing title amongst a wave of others within the genre. Others might have some smoother controls, or at least a radar map, but the ability to play your own music sets Phaze apart for me. Buckle up, blast off, and hang on for a lightning quick ride through interplanetary race tracks along brilliantly colored backdrops.