1:25: Not much going on so far since the beginning of this thing.  The biggest announcements thus far have been that Farmville is officially coming to the iPhone and iPod Touch platform.

1:26: Guitar hero has also been announced for the App Store with an “all new strumming method”.  Guitar Hero is going on sale today for $2.99.  Editor note:  It probably will be a direct rip of Six Strings strumming method.

1:28  Steve is back on stage and talking about how many apps have been downloaded/sold on the App Store.  Apple has dispersed over a billion dollars to developers.  Editor note:  That means that they received hundreds of millions from the developers.  Not a bad gig.

1:29  iPhone has 28% share, Android at 9% and Blackberry (RIM) has a 35% share of the cell phone market.  Editor: I told you he would start talking trash about Android.

1:38 New phone has 4 times as many pixels!  326 PPI.  Pictures are much clearer.  Text is like a “fine printed book”  Especially text is better.

1:39 Basically it sounds like it is the same  quality as you find in a printed newspaper. 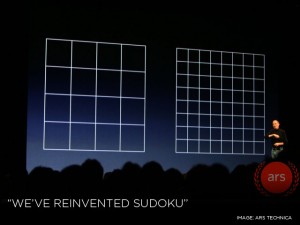 1:42 Steve has a bit of a gaffe.  His phone and even has his backup couldn’t connect to the internet during the demo.  He is skipping it.  he was supposed to be showing the New York Times.

1:47 Editor: Since the display is the same size, but they fit 4 times as many pixels, the developers won’t have to reprogram their apps to make them work.  they will need to use higher quality images for you to see a big difference though.

1:50 Phone now has 6 axis of motion!  Can now use accelerometer and gyro at same time.  Look at the size of that battery. 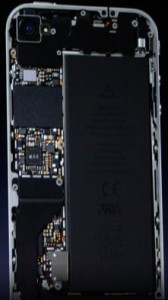 1:53 Steve shows how these new motion types will work together by playing a game of Jenga.  macrumorslive.com says that the 3D motion is unbelievably smooth 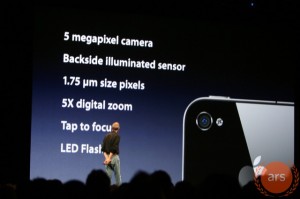 1:59 Randy Ubillos has been brought on stage by Steve.  He is the chief designer of iMovie for the iPhone.  Sounds like it allows you quite a bit of flexibility to edit and modify your videos.

2:01 Works almost exactly like iMovie for a Mac, just on a small screen.  Editor: This looks ok, it even allows you to modify pictures a bit.  It also has some nice overlay and phase techniques.  That being said, I am sure this is one category where a lot of 3rd party app creators will be throwing in their hats. 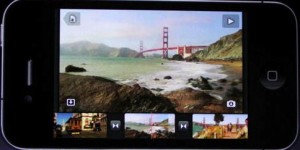 205: Steve is back on stage.  He is asking everyone in the room to turn off their wi fi devices because before the device couldn’t connect.  Apparently there are 570 wi fi devices in the room right now.  This is going to kill the live blogging.

2:06 Steve says that the iPhone OS has now dropped the phone nomenclature.  It will now be called iOS.

2:08 He is going through the features of the iOS 4 including multitasking, folders, etc.  Basically all of this stuff has been shown though.  He is going to demo Pandora while doing something else.  Apparently Jack Johnson is his go to guy.

2:12 I’m going slower because he is.  He is still going through some of the other things he has shown before.  Multitasking can be used by scrolling on the bottom left and right.  You bring up multitasking by double tapping the main button on your device.

2:14 New unified email system is nice.  One folder groups all of your email accounts into one so you can easily see all of your new messages from home, work, etc.

2:15 Bing is now a standard choice on the iPhone.  Google still a choice as well.  Stays default search engine.  OS 4 final coming to the developers today.  Big question is when will it for us?

2:16 iBooks coming to iPhone.  Personally I can’t imagine reading a book on my phone but maybe with the better screen, it would be ok…  Time will tell.  Same bookmarking, highlighting as on iPad.

2:17 All emailed PDF’s will automatically open in iBooks.  We are getting close to the end and they have one more feature to discuss.

2:18 Buy a book for your iPhone or iPad and you can use it on both devices.  Editor: As it should be.

2:22 The 8th big feature is …what the hell?  iAds?  Oooh.  Thanks for advertising to us better Apple.  I really enjoy that soooo much.

2:24 I missed this earlier but this is pretty huge in my opinion.  Netflix App coming to iPhone!  I love instant queue movies.  Can’t wait to see this on the App Store.  hopefully free like the iPad version.

2:29 iAds enabled on July 1st.  60 million dollars of advertising has been sold by Apple to be sent out for apps.

2:33 Video chat “looks great” I guess.  Steve is really complaining that people aren’t turning off their wi fi.  Geez Apple, you don’t even want to test AT&T’s network do you?

2:35 Apparently video chat is being called FaceTime.  You can call iPhone 4 to iPhone 4 anywhere you have Wi Fi connections.

2:36 Wi fi only for now.  Portrait and landscape mode.  They are working with AT&T to try and get it to work (maybe Verizon and Sprint?)

2:38 Can’t FaceTime with anyone other than iPhone 4 users.  No Mac iChat users. 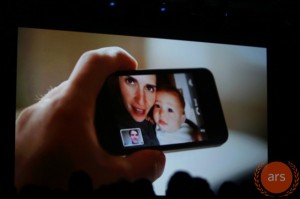 2:45 iOS 4 upgrades free for all devices!  Coming to everyone on June 21st!  3G and older Touch devuices have quite a few limitations (like no multitasking).

2:48 That’s pretty much it folks.  Let us know your thoughts about what went on.  Are you going to pre-order or wait and see?  What do you think about the new features?  Overall thoughts will be written up later today or tomorrow morning. 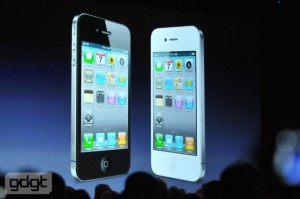 Pictures from Ars Technica and gdgt