Just in time for the World Cup, the developers at GAMEVIL Inc. bring us the latest explosive sports title in Soccer Superstars. Packed with an assortment of gaming modes, customizable characters, and nearly every country under the sun, there’s more than enough here to keep soccer fans busy. While it’s definitely not the next FIFA, this still has some potential to quench your soccer thirst. 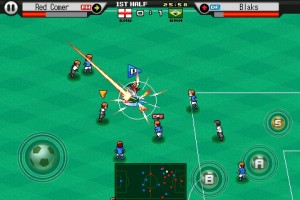 After selling over 10 million copies of their previous title, Baseball Superstars, it’s no wonder GAMEVIL Inc. decided to try their hand at another timely sports game. The varied play modes offer a little something for everyone, with exhibition, season, my league, cup, and dramatic options all available. My League is probably the most entertaining, as it allows you to create your own charismatic, customizable character. Over time, your salary, skills, and special shots are upgraded, as you aid your team in its quest for World Cup glory.

While many people are accustomed to the detailed, full 3D rendering of EA Sports titles, Soccer Superstars is more on the cartoony side of the visual spectrum. There’s plenty of anime inspired cut scenes and drawing, which is occasionally humorous, but often unintentionally. During game play, the camera angles are pretty responsive, as clearing kicks rocket the ball to midfield and strikers launch shots at rocket-like speeds. After a triumphant goal, your team runs like wild men around the field, piling on top of each other just like soccer champions on television. 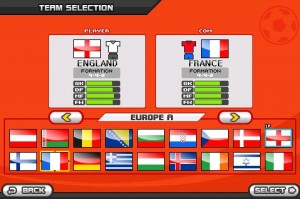 The soundtrack is pretty varied, loaded with different tracks for menus and during game play. Ranging from quirky, funky dance hooks, to crazy dramatic techno which sounds like it came from the original Street Fighter game, there’s enough happening to keep your iPhone’s little speakers busy. While squaring off against a bitter rival at the stadium, the crowd cheers, whistles blow, and the punching sound of a cleat booting the ball across the field all shower your ears.

The major complaint surround Soccer Superstars is the unusual control system. In order to move your different players, you touch a circle in the bottom left corner on different sides, somewhat similar to a d-pad. If using the semi-auto mode, they’ll move on their own, and holding down in a particular direction will boost their speed. This sounds like it should make things easier, but the fuzzy responses can become confusing and frustrating, especially when the game automatically speeds up during My League play when the computer has possession. Sure, it makes the games go by quickly, but between the speed changing back and forth, as well as losing track of my player every so often, there were points where I was just pressing buttons in hopes of a steal or an accurate pass.

For shooting and passing, the developers added in two separate buttons, and holding them would execute a more powerful kick. Again, sounds easy, right? However, on numerous occasions, I found myself pressing the button, and receiving delayed reactions from my soccer player likeness. Sometimes I’d commit a turnover, but there were definitely some buggy occasions where I was pressing shoot two or three times and yelling, “Kick the ball, you idiot!” 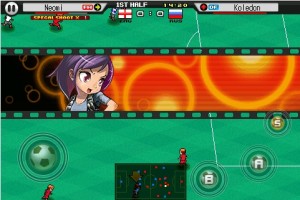 GAMEVIL Inc. killed it as far as options, modes, and customization, but hit some bumps in the rode with their control system. While Soccer Superstars allows you to pick everything from your formations, play style, and hair color, it fails at achieving the same level of liquid control demonstrated by FIFA. Sure, you can say they’re very different games, or it’s unfair to compare the two, but any sports gaming fan already knows the franchise which set the benchmark for all other soccer titles.