I am a huge fan of local multiplayer games for the iPad that allow you to use your iPhone as the controller. I feel games like PadRacer are extremely ground breaking and have opened up a whole new gaming experience for Apple gamers. 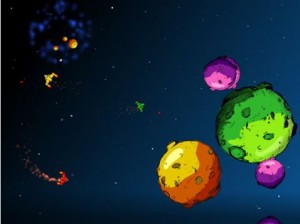 Recently, I was asked to review a new iPad multiplayer game so I of course jumped at the chance. The new game is 2D spaceship shooter called Plane. Thankfully the developers at MPad gave us some review codes so I could fully test out their new game.

Before I start talking about Plane, I want to cover what the people at MPad are doing. They are one of the first companies to really attack the iPad as a multiplayer device. Some companies are charging up to $9.99 for a game and that wouldn’t even cover the cost of the controller downloads. But at MPad all you have to do is buy the controller once for $.99 and the iPad games are forever free.  Not a bad deal for all of us gamers out there. 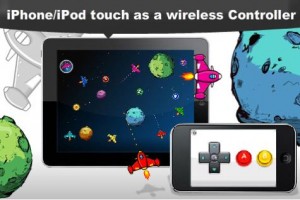 The multiplayer aspect is by far the best part of the game. There is a single player mode that times you and all you have to do is stay alive while dodging asteroids and gathering Power Ups. Honestly, I feel that the single player mode is lacking a bit of excitement. There isn’t another ship that you are fighting against, just the clock. I would really like if they added an A.I. ship or ships.

There are four types of power-ups; shield, speed, bullet upgrade, and invincibility.  All of the power-ups are available in both single and multiplayer. The bullet upgrade is, in my opinion, the most significant because it adds an additional bullet each time you pick one up.

The real fun is dog fighting with your friends in multiplayer. When you shoot one of the other players, their ships don’t explode, they shrink. But beware, after taking a few hits your shrunken ship will be toast.

The controls are great. Once you open the game on the iPad and the controller on the iPhone you will be able to select the iPad from a list and boom, you are connected. The controls do not get much simpler. There are two arcade style “buttons” that control your acceleration and shooting. To turn your ship just lean the iPhone left or right. If the turning is too sensitive or not sensitive enough you can change it in the control option on the iPhone. If you don’t like tilting to control your ship there are also a few other controls types like a directional pad and joystick. 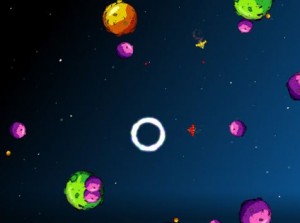 The graphics and audio are above average compared to other iPad games, which is great considering that the real heart of this game is in the multiplayer gameplay. Plane is definitely worth taking a look at if you own an iPad, not to mention MPad has two more multiplayer iPad games in the works that you will get for free once you pay for the $.99 controller on your iPhone or iPod Touch.