Wurd is a spelling and vocabulary game.  Basically it shows you a word and it asks you whether it is correctly spelled or not.  Of course it also requires that you have an in depth knowledge of some of the most obscure words in the English language.  For me, I’m the kind of guy that likes that kind of thing.  For many, it is a literary nightmare. 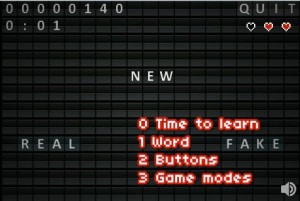 The game gives you three different modes.  One is timed and the other allows you to go on endlessly but both modes come with a game stopper; miss three words and you lose.  The only challenge is taking you score and comparing it to others across the leader board and earning some random achievements via OpenFeint.  Somehow I ranked fairly high but I think it’s because there isn’t a lot of competition at this time.  When you do miss the word, you’re simply told you are incorrect and the game moves on.  Practice mode is the third mode and it allows you to go on as long as you would like without scoring or the three words missed and your out rule. This is the best mode for those wishing to practice their vocabulary. 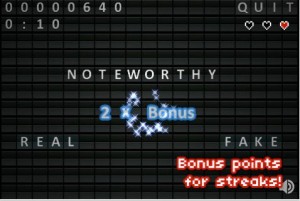 Unfortunately, I have to tell everyone to pass on this game, but not because I don’t appreciate word puzzles.  Instead the most frustrating part of this game is the menu transitions.  Between every transitions there is a screen that slowly transitions to the new word or menu.  This screen works like the letters in Wheel of Fortune; you know the ones that flip over slowly?  This screen takes about 2 seconds to long to turn over and after a while becomes incredibly annoying.  If this screen goes away, add another star to the overall rating. 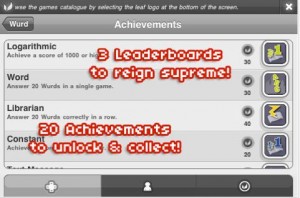 The key to this game is that it really is educational while also giving you the ability to go back and see what words you missed when you were wrong. You’ll find previous games as an option on the main menu. Going into that will allow you to see every game you played along with each word that was correct or missed.    By tapping the word you missed, it takes you directly into the Free Dictionary with the definition of that word and how it can be used in a sentence. This is incredibly powerful.  One thing that would be really nice going forward is if you could select what reading level you would like to practice for.  That way, kids that are younger would not see words like, supposition. Nevertheless, the historical review allows Wurd to really be a nice educational tool that gives kids (and adults) a way of comparing themselves to their friends, while continuing to be educational.  It is just too bad the transitions take so long and are so annoying.