Filled with detailed exploration, secret powers, a host of assorted enemies and maze-like puzzles, Phoenix Spirit is the latest adventure release from Spearhead Entertainment. Utilizing an interesting tilt-based control system, players embark on a journey to save the Mother Tree from losing its life force and perishing, much to the dismay of our flying squirrel hero. Designed in a similar style to classics such as Metroid or Castlevania, Phoenix Spirit is decent, but falls short of the games it attempts to emulate. 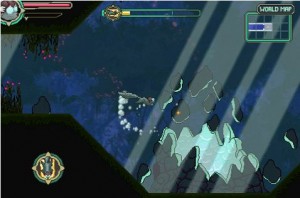 Combining different characteristics of adventure, action, and shooter titles, Phoenix Spirit allows you to roam throughout the Mother Tree in any direction while attempting to cure its ailments. Diseased roots, poisonous clouds, and various enemies have infested the tree, leaving Phoenix the duty of saving their kingdom. Operating slightly like an RPG, you explore assorted paths, attempting to overcome obstacles and barricades, while eventually securing various upgrades and skills which make your tasks easier.

With a lush physical landscape, filled with plants, vines, flying enemies, and detailed backgrounds, Spearhead Entertainment painted a nice portrait of the world beneath the Mother Tree. Phoenix sails through the air with trails of white flowing behind him, while the explosive attacks fire bright orange and yellow trails as they hurdle towards the enemy. The animation is fairly smooth, and even better, there are literally zero load times after the game initially boots up. 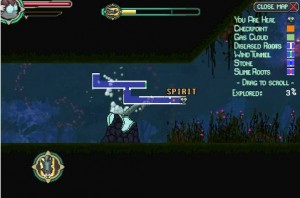 The soundscape created is fairly subdued, but fits the game pretty well. Twinkling rhythms gently emit from the speakers while your journey continues, creating a nice atmosphere for gameplay, albeit slightly repetitive after some significant time. Sound effects are similarly sparing, but still present with each attack, boost, or opening of a burly green vine to allow you passage to another section.

Akin to so many other iPhone titles, Phoenix Spirit suffers a few setbacks with its control system. Whichever way you tilt the device, Phoenix responds accordingly, which requires some experience to keep in check. While accelerating, our furry hero always flies downward for some reason, creating some irritation when you clearly need to continue upward. There also isn’t really any method to slow down, occasionally resulting in sailing right into noxious clouds or the jaws of a feisty enemy. 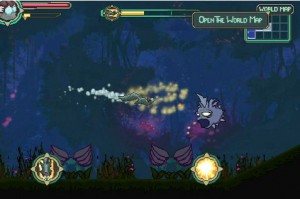 While nearly every element is present in Phoenix Spirit, it just wasn’t successful in holding my attention for extended periods of time. The control issues are definitely capable of turning some would-be fans right off, and the seemingly endless maze of exploring tends to drone on a bit. There are decent graphics, sound, and silky smooth play, but if you pick this up thinking you’re in for the next Metroid, think again.