When the successor to one of our favorite games to last year was announced, we were understandably delighted.  Now that I have had the chance to play it for several hours, I can say it easily lives up to my high expectations and in some ways surpasses them.  Super QuickHook is the sequel to last year’s critically acclaimed Hook Champ.  While the gameplay mechanics are similar in many ways, a few distinct additions and additions by subtraction have been added that make the game all the sweeter.  Add in the terrific, updated graphics and it is truly a game that is worth getting. 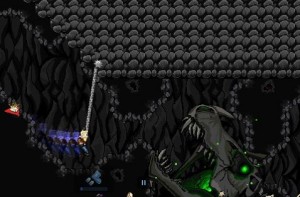 The gameplay revolves around you taking one of several characters through a multitude of levels.  The fastest way (and coolest) to get through the levels is by using your grapple hook.  Along the way you will be racing against the clock, trying to pick up as many coins as possible and ensuring you don’t fall in one of the many pits of doom below.  The gameplay itself is a heck of a lot of fun but one key addition was the ability to challenge a friend to try and beat your score.  That social networking component adds in a ton of replay value.

In Hook Champ, you consistently had a “Ghost Fish” following you, chasing through each level.  Go too slow and the fish would eat you up.  It’s fun to be chased across a level but it makes your time and coin pickups arduous.  Thankfully, that bit has been entirely removed in all but one mode of play called Avalanche.  The Avalanche mode gives you the ability to go as far as you can without being taken out by the impending snow.  This mode is for the veterans out there because it can get very hard, very quickly.  Nevertheless, it’s a fun addition that for many games on the market would constitute the only game mode available.

The main mode within the game is to unlock levels.  The game shipped with a bunch of them and the newest update of Super QuickHook adds a few more.  Each one takes place in a different setting.  You’ll see snow, ice, grass, mountains and lava.  All of the levels have 3 goals that vary in difficulty but give you something else to unlock if you so wish to.  Many of the levels need to be completed before you can unlock the higher, more difficult stages.  It’s really for the best because lessons and skills you pick up in the previous levels will help in the latter stages. 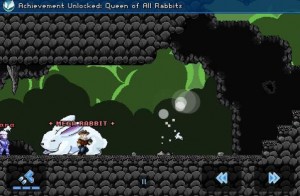 Like Hook Champ, you’ll have a store available to upgrade a variety of different things that will help you on your journey or just make you look cool as you swing through the sky.  You’ll find upgrades for your grapple hook, hats to adorn your head and a ton of other stuff.  One of the best things about developer, Rocketcat Games, is that they continued to support Hook Champ well after its release with free additions.  If the first update says anything, it looks like they will be doing the same with Super QuickHook.

The graphics within the game are incredibly nice looking.  Each background looks entirely different and though the game still offers a retro feel, you’ll find the retro decade to be much more in the mid 90’s than the mid 80’s (as was the case in Hook Champ).  The upgraded graphics were a welcome addition and cause no noticeable slowdown on my 3GS.

Finally the music within the game is incredible.  Within the iPhone and iPod Touch gaming world, I have only heard a few games with a better soundtrack.  Upbeat, lively, thumping beats power you forward.  The sounds effects themselves are a tad simplistic but are serviceable. 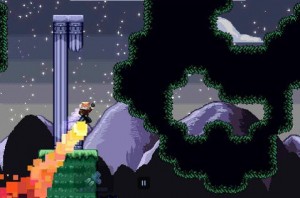 This game is a must buy for anyone who loves iPhone and iPod Touch games.  If you liked Rope n’ Fly, you will absolutely adore this game.  If you liked Hook Champ, I’m surprised you haven’t bought this game already.  Rocketcat Games has done it again with a brilliant release that is a definite front runner for iPhone Gamer Blog’s 2010 Game of the Year.