It’s rare that a title bursts into our lives which is so outrageously offensive that it just might be unbelievably entertaining. The World Cup is in full swing, and as the international community celebrates their unifying pastime, many developers are creating intricate, imaginative soccer games in an attempt to capitalize on the epic event. What does Nemoid Studios do? They piece together a completely insane game featuring a deranged, naked fan whose ultimate goal is to slaughter players and security guards with an arsenal of wild weapon choices. 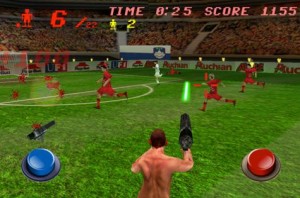 Super Streaker Pro allows the player to take their pick of marquee matchups between worldwide soccer heavyweights, which gives you a specific mission to complete. Whether it’s “Shoot 10 security guards,” or “Kill all the players,” one thing’s for sure; carnage is inevitable. Using a third person camera angle, your homicidal nude character rampages across the field while the players make a futile effort to keep the game moving. The more damage you inflict, the more security guards give chase to tackle you to the ground and end the sadistic fun.

There’s plenty of choppiness in the animation, and most of the background images appear fairly flat in Super Streaker Pro. It’s by no means a terribly impressive visual game, but they managed to keep the game from completely falling apart. The sprites are blocky and almost halfway rendered, while the players running appear to move at slow motion speeds. Most of the characters look exactly the same, with each team wearing different colored jerseys, and the security staff in bright yellow shirts. Red blood flies across the screen with each successful kill, along with explosions and other associated effects. 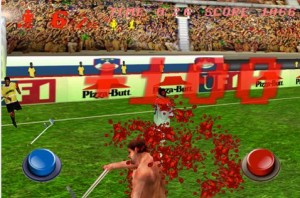 While this lunatic parades around in his birthday suit, the crowd cheers nonstop as Molotov cocktails burst into flames, air horns blow people away (Editor: thankfully no vuvuzelas), and laser cannons burn holes in security guards’ chests. The sound definitely surpasses the quality of the graphics, utilizing an array of appropriate effects to keep the action pumping along. 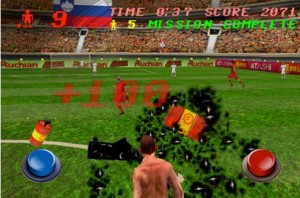 Possibly the lynchpin of this offensive escapade is the incredibly simple control system. Tilt the device to run different directions while your psychotic fan runs on autopilot. There’s one button to change weapons, and another to fire. Literally, Super Streaker Pro doesn’t include, or need, any other controls. If you’re within a certain range, crosshairs will pop up, locking onto your target and making the shot even easier. Instead of overcomplicating things and muddying a simple concept, Nemoid Studios delivered users a fun, and almost frustration free control system.

While this is sure get some people’s underwear in a twist, and the graphics are somewhat subpar, Super Streaker Pro was surprisingly addictive and fun to play. Maybe designing a game with a streaking fan slaying soccer players is in poor taste, but it’s difficult to complain about it anymore after games such as Grand Theft Auto completely blew the lid off the gaming world. If you have a sense of humor and enjoy a simple, crazy shooter, this belongs on your iPhone.