The key to any great strategy game is that once it hooks you, a new challenge begins: the battle to stop playing! Who hasn’t strategically kept a Word document a mouse-click away to hide a tense round of Tetris when the boss walks by? Or couldn’t stop seeing Minesweeper flags surround the characters of The Hurt Locker? And admit it, the only reason you stay in touch so well with grandma is to own her ass in online Mahjong! Just me…? 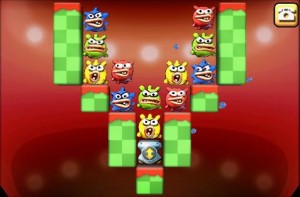 Well if you’ve been waiting for that next strategy challenge too, then Germinal: Antibacterial Crusade might just be what the doctor ordered. (See what I did there?)

So the graphics are cartoonish, and the gameplay simplistic (You slide your finger over the screen to crash mutant germ balls into each other. That’s it.), but that still didn’t keep my iPhone from going to sleep when I couldn’t figure out the next move. This game is difficult, but thankfully not impossible.

I was only at Level 02 in the first stage of the game when I began questioning my intelligence. It was admittedly discouraging, but the game designers knew they were smarter than people like me. That’s why they have allowed the player the ability to advance to subsequent levels without completing the previous one.

My first reaction to this discovery was relief. I didn’t want to be stranded on only level 2 before giving up, but once I began catching on to the game strategy I became concerned that the ability to leapfrog levels would decimate the stakes. Not so. After conquering the next four levels, I was forced to revisit the dreaded level 2 before being allowed to continue to the second stage. I appreciated this give and take. There’s also “go-back” and “restart” options built into the levels for any screw ups (unless you’re the rah-tard from Rain Man, you will use these buttons) allowing you to evaluate and recalculate every move. It’s knowingly challenging, yet graciously forgiving. 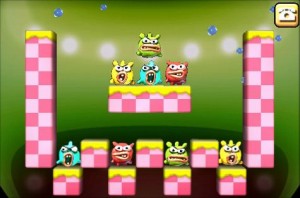 Like many games available right now for the iPhone and iPad, Germinal seems like a throwback to the days of 8 and 16 bit graphic platforms. In fact, it bears a striking resemblance to Taito’s 80’s classic Bubble Bobble in its aesthetics and design. This isn’t a bad thing, especially for nostalgic gamers like myself. However, I could have gone without the grating synth midi music. I’m not that wistful for 1986.

Overall, this game is another great productivity distracter. It’s a simple, straight-forward operation that encourages brain activity by giving the player time to consider each move – a welcome relief from manic-paced button-mashers that inundate the console world. 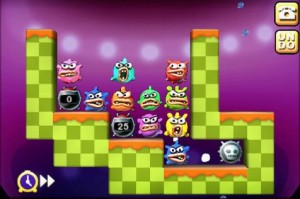 So let grandma win the next round of Mahjong. You could be playing Germinal during the century it takes her to consider which goofy tile to click. She’ll never know.