First of all let me clarify, this is not a review for the HD version of the game. That version is just for the iPhone 4 and has upgraded graphics. This version is will work on iPhone 3G, 3GS, 4 and iPod Touch. The HD version has been causing issues in the App Store and hasn’t been getting good reviews because of the slow, jerky graphics. 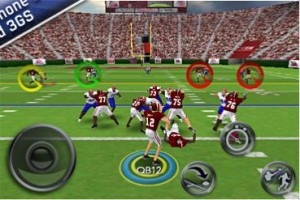 Now with that taken care of, if you are a sports fan, go buy this game. Be very careful in the App Store and make sure you get the appropriate version for your device, but nonetheless, buy this game.

I will assume that you have played an EA football game before, either on the PlayStation, Xbox or some other platform. Every year EA Sports releases a new Madden and NCAA Football and every year millions of people pony up the cash for the newest version. Sometimes we buy it because of the new gameplay features but mainly (especially in the case of Madden) I think we buy it because of the updated team rosters.

This is the first version of NCAA Football for the App Store and upon loading it up, it looks great.  The menus are very easy to navigate. The main menu gives you several options; Play Now, Season, Multiplayer, Create a Team, Rosters, Options, and Help. I went straight for the Season play. Being a pretty big Notre Dame fan, I picked them for my home team. Within the Season menu it gives you several additional options including Play Week, Depth Chart, Stats, Schedule, and Standings.

My first game was a little rough going as I learned the controls. The controls pretty much run the gauntlet as far as what the iPhone has to offer. The touch screen is used to select players pre-snap and also used to draw hot routes for your receivers. To maneuver the players during gameplay, EA decided on a virtual joystick that can be set on the left or right of the screen. The joystick takes a little while to get the hang of but after a while it will become second nature. 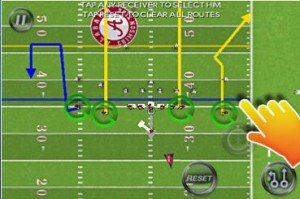 To minimize the number of controls on the screen at once, NCAA Football shows specific controls at certain times during the gameplay.  For example, on pre-snap defense, only two buttons are present; audible and switch player. As the ball is snapped a third button appears, the Action Control button.  Meanwhile the audible button turns into the speed boost. The Action Control is probably the most important button in the game. It allows you, once tapped, to enter Action Control Time, which slows down the gameplay and also brings up more buttons like tackle, jump, and push.  The offensive Action Control buttons are juke left, juke right, power.  These controls will make a huge difference in your play once you learn how to use them.

The audio is no different than any other version of NCAA Football I’ve played. You’ll have Lee Corso telling you that you should’ve gone for it one play and the next you have Kirk Herbstreit telling you to punt.  The crowd noise and the sounds of crashing helmets and pads is also a staple in the EA NCAA franchise and you will find them in this version as well.

I know this isn’t the HD version of the game, but nonetheless the graphics are still pretty good. With that said, the player’s movements are not as smooth and quick as the Xbox versions but that’s not really surprising.  This is after all, just the mobile version. 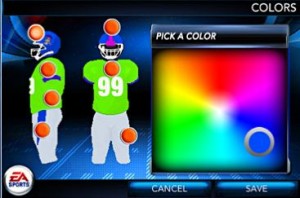 If you’ve wasted your time and have actually read this entire review after reading the second paragraph then good for you… but like I said 500 words ago, go buy this game. The HD version will run you $7.99 and the non-HD version is a buck less. Get your friends to buy it too, you can play each other using multiplayer via Bluetooth.