Yet another console game adapted for mobile enjoyment comes our way from the great people over at XS Games. Originally a release on Playstation 2 and PSP, Red Star drops players into a futuristic, super technological world to wage war with the all powerful and evil United Republics of the Red Star (URRS). Prepare to choose from a selection of characters and strap in for some side scrolling, 3D mayhem, complete with super moves, melee attacks, and heavy firepower. 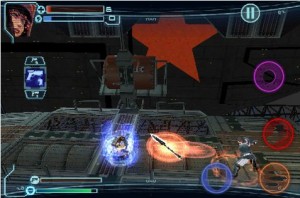 Although the title carries a $4.99 price tag, there’s plenty of gaming included, as XS Games pulled of a slick job of recreating Red Star for iPhone and iPod Touch. While traveling through each area, players are given a variety of attacks, including special moves, guns, and a shield. Health appears to be super limited, so learning how to effectively utilize the shield and avoid attacks is crucial, otherwise you’ll be seeing the ever-so unfriendly “Game Over” screen pretty swiftly. There are plenty of unique enemies, each with a set of attacks, shields, and abilities; all of which are able to take your hero down fairly quickly.

Reminiscent of the console release, Red Star uses the popular side scrolling mechanism while battling your way through soldiers and explosions. Everything is pretty well rendered, with brilliant color trails following handgun blasts, and bluish-white streaks emitting from your razor sharp melee attacks. The enemy sprites each have their own individual uniforms and animated attacks, helping to break up the monotony which commonly plagues games of this ilk. Unfortunately, there is some definite lagging and choppiness while playing, which can wreak havoc on your life meter while attempting to dodge a spinning blade or missile attack. I’ve heard this runs far smoother on the speedier iPhone 4, but for now Red Star is pretty far from liquid smooth. 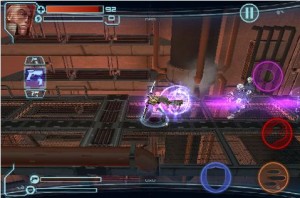 Triumphant marching and war music booms in the background while playing, with assorted sound effects slicing their way through with each devastating attack. Everything is fairly quiet, even with the levels turned up, which is actually kind of refreshing after playing so many games with obnoxiously loud volumes. Space age rifle blasts, smashing blows to the enemy’s face, and bursting explosions are just some of the items which complete the effects spectrum.

While it might be partially due to the game’s occasional jerky quirks, the control can become slightly bothersome as well. Moving the character is done by sliding your finger around on the screen, which functions decent enough, but it’s pretty easy to end up facing the wrong way while a URRS soldier smacks you upside the head. There are four main buttons for actions, including shoot, melee, shield, and a super move which requires charging. To lock onto your next foe, double tap the screen, and quickly attack to inflict accurate, quick damage. After some experimenting I was able to keep everything together pretty well, but Red Star would infinitely benefit from smoother gameplay. 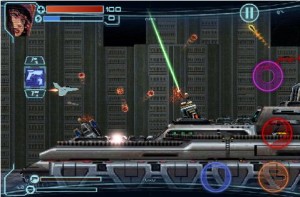 Most of the negative points on Red Star are in some way associated to the lumbering slowdowns, so it’d be exciting to experience this without any hiccups. It’s definitely an entertaining title, with plenty of potential for possible improvement as well, and fans of side scrolling beat-em-up games are sure to dig this one.