Fly vs. Car Brings Charity to the App Store

Supporting a good cause has never been more fun.  Today’s release of Fly vs. Car signifies the only game on the App Store (as far as I know) that promises to give 50% of all profits on a continual basis to a charity named Child’s Play.  Child’s Play, founded in 2003 by the guys that make Penny Arcade, helps hospital-bound kids who are ill by sending games, movies and other neat stuff.  It’s entirely sponsored by gamers around the world and has been enormously successful.  For more information about Child’s Play, go to their website. 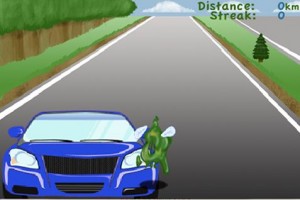 In the meantime, if you are looking for a good game for your kids, Fly vs. Car is a good choice.  No buttons, just simple tilt steering at its finest.  Guide you fly through the oncoming traffic, all the while working hard to earn achievements via OpenFeint.  You also have the once click ability of sharing your high scores with friends via Facebook and Twitter.  This game certainly isn’t for hardcore gamers or someone that is looking for a ton of options.  However, if you’re into Doodle Jump’s simplistic controls and love to help a good cause, this game is worth picking up.