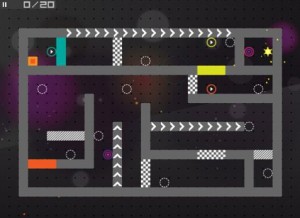 The game’s concept is simple. You must get a yellow and orange block to a star that symbolizes the end of a level. However, you can’t move the block; you can only change the gravity of the game and let the block fall. By switching the gravitational pull you create physical elements such as inertia, speed, and bouncing. The block will possess all of these characteristics during gameplay, which adds a level of difficulty.

The levels start out as a tutorial of sorts, letting you learn the ropes and get the feel of the game. The tutorial is a must for first time players because it explains all of the in game obstacles such as:  Conveyor belts, exploding blocks, locked doors, black holes, worm holes, and more. The later levels take thought and foresight because of the amount of obstacles that need to completed or dodged. 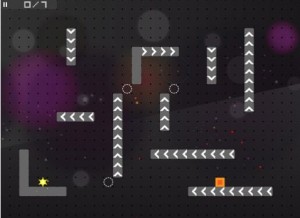 The controls are very simple and are totally tap based. The screen is broken up into four triangular sections. Imagine lines being drawn from the corners of the screen to the opposite diagonal corners. The two lines would intersect in the middle creating a large “X.” The triangle sections are the areas that you touch to change the gravity to that side of the iPad. Don’t worry, if that was confusing, the tutorial explains it and even shows the big “X.”

The graphics are simplistic and sharp-edged, but with the word “block” in the title, what did you expect? The graphics aren’t bad; in fact, they fit the game well and serve the purpose as well as the theme.  The music…well, it reminds me of the movies Home Alone and Exorcist (Editor: Am I the only one thinking of Kevin’s head spinning around in circles?).  One of the songs that loop during gameplay sounds like Tubular Bells, but the game does include other songs that give that same sort of creeping, mind bending vibe. 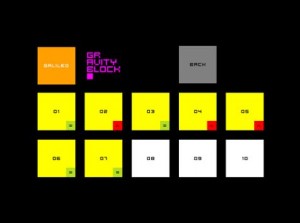 I would classify Gravity Block HD as a physics game, probably a physics puzzler. But, it’s different than Ragdoll Blaster and Bomb Master, the puzzle aspect being much more important in this game. You can get 40 levels for $0.99 and if you can master those levels you can buy 3 premium level packs for another $0.99 each.  Gravity Block HD is well worth the dollar in my book.