Predator is one of my favorite movies of all time.  Predator 2 wasn’t quite as good but still, it was pretty badass.  However, the movies that used the Predator name following those first 2 sucked.  I haven’t watch the newest movie but having just played the iPhone and iPod Touch game, Predators, I can tell you one thing for sure – it is a whole lot like the first two movies – in other words, it’s awesome.  The gratuitous blood, killing and weapons make this everything a Predator game should be. 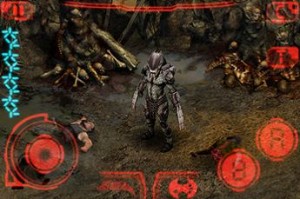 Predators puts you in the position of a new recruit, but not of the humans hunting the Predators.  No – you are a recruit on the Predator home world.  Your mission is to kill every last one of those humans that have landed on your planet.  Luckily your elders give you all the training and weapons you need to do just that.  The game has about 25 levels that take several hours to beat.  The first five levels or so are basically there to teach you the basics of the gameplay.  In truth, this part of the game isn’t very fun.  Shortly thereafter, the real fun begins.

You begin with just the razor sharp Freddy Krueger looking blades that are attached to your wrists.  On the way, you will earn honor points for kills and different types of kills earn you more points.  These honor points will allow you to upgrade you weapons and make them even more powerful.  And all of the weapons from the movies are here including the throwing disk, the net gun, the plasma cannon, and more.  They all work brilliantly and give you a very real sense that you are a dominant predator on your planet.  As you rise in rank, you will literally be an army smashing force (as you should be) and it makes you feel powerful.  It’s a very good thing. 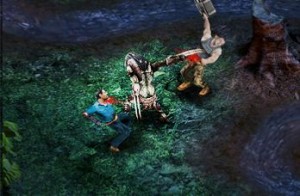 The graphics are a top down, 45 degree angle view.  All levels seem to be set in the jungle and unfortunately there isn’t much variety when it comes to the levels themselves.  You’ll notice a tree here or there in a different place but that is about it.  That being said, the graphics are very nicely done and chopping bodies in half or pulling a person’s head off (for a Trophy Kill) are all in the game.  If it sounds incredibly violent, it is.  But, if you have ever watched the first two movies, you should feel right at home.

The music is a jungle beat that is continuously looped throughout the game.  It does get tiring after a while but likely you’ll be so involved in the nonstop action that you won’t notice too much.  The rest of the sounds are very well done.  All of the weapons make the appropriate sounds and when it rains, you’ll hear excellent background effects as well.

Raining is actually one of the things the game creates to force you not to be absolutely dominant.  You see, you also have the Predator’s ability to turn invisible and use thermal vision.  Turning yourself invisible sucks out a bit of energy (you have a battery that powers up when you are not using it) but it makes it extremely easy to kill someone.  The rain however makes it so your ability to turn invisible is all but gone.  You’ll get maybe a second of invisibility as opposed to 15 seconds or so without the rain.  Many missions are done in the rain to prohibit you from cutting everyone down using your stealth generator (invisibility). 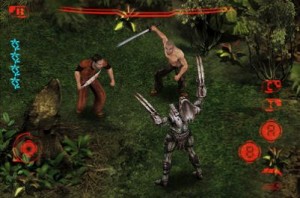 All in all, if you are a fan of the series, I don’t see how you wouldn’t like this game.  It is fast, ferocious, and full of violence.  You really feel superior to all of the enemies you face with their petty guns and knives.  Your ability to slice and dice them the way you want to really adds to the enjoyment.  And remember, if you feel bad about killing these guys, they are bad guys and they are invading your homeland.  As a Predator fan, I have had my share of disappointments in movie sequels and game adaptations.  This game awakened my old love of the series and I think that’s a very good thing.