Ping Ping is kind of like bar room shuffleboard.  Have you ever played it?  The idea is that you slide several puck-like objects across a long piece of wood trying to land it in your competitor’s area.  The difference in Ping Ping is that instead of trying to land it in a certain area of the board, you are trying to knock your opponent’s pucks off the board entirely.  That would all be fine and good if it wasn’t for one thing – it’s incredibly boring to play the computer. 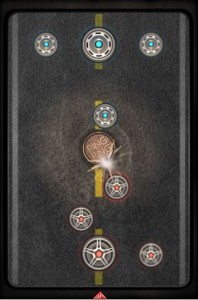 You see, you have 4 pucks and so does your opponent.  3 of the pucks are the same size and the fourth is almost double the size of the others.  A coin flip in the beginning decides who throws first.  The pucks are lined up in a way so that the coin flip decides exactly how the first shot will turn out.  Either the computer will throw directly towards the center of the board (and nearly knock one of your pucks off the table) or you will throw at the computer’s side and do the same.  The computer will ALWAYS throw in the exact same place if it has the first throw.  That’s a problem. 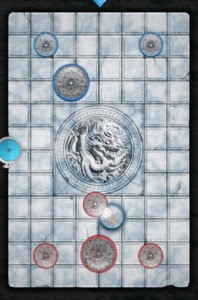 An even bigger issue arrises with the fact that the game gives you several different surfaces to place on.  One surface actually has a blocker in the middle of the level which makes it impossible to throw that first shot across the board – that is smart.  One of the levels is ice and the first person who throws automatically can knock the opponent’s first puck off due to the slick surface- that is not smart.  The physics within the game are well done and the pucks feel like they have actual weight.  The level design is entirely inept. 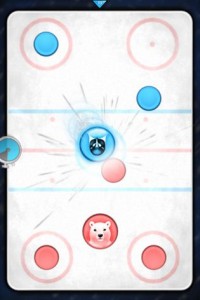 The problems don’t end there.  One of the other frustrations with the game is that it nearly always gets the intended strength of your throw wrong.  Sometimes it will pick up the smallest touch and whip it across the board (at best wasting a turn and at the worst losing your puck).  Other times you will try and throw it as hard as you can and the flip of your finger on the screen flips it across but much slower than you intended.  Finally, the game has no end game.  You simply play until you win or you lose.  There are no stats, no way of playing online (although there is a local 2 player game that can be fun) and no social network element.  This game is a pass.