Alright, so who spent some time at one point or another playing the Quoridor board game? For the uninitiated, Quoridor was a popular game throughout the 90s, winning a number of awards during its prime, which was translated into the 2000s through an online format. Simiula took on the challenge of porting this onto the iPod for puzzle and board game enthusiasts, in an attempt to capture the fun and excitement generated by the innovative original. While the entertaining concept is still there, an overall rigid feel which spreads from graphics to controls takes away from what should be pretty simple enjoyment. 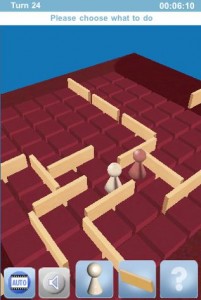 The general concept is to advance your piece from one side to the other, similar to checkers or other classic games. However, what makes Quoridor unique is each player’s ability to place numerous mind boggling road blocks in from of your opponent’s path to victory. While there are a couple rules to prevent overly obnoxious moves which complete fence in someone’s piece, everyone is fairly free to either move one square or throw another obstacle onto the enemy’s side. With a general game time of around seven minutes, it goes quicker than most would initially think, forcing people to think on their toes and find an appropriate solution while taking on the computer or a friend.

While the game is rendered into 3D, there appears to be way too much choppiness, especially since most of the visuals are squares, rectangles, and other geometric shapes. You can see the pixels break, as unsmooth edges on the fences give off an almost saw blade-like appearance. Three different views are available, including straight above and a close up diagonal shot to ensure players can see all the action. While the diagonal option is the most appealing visually, a directly overhead shot creates the best opportunity to devise a clear strategy. 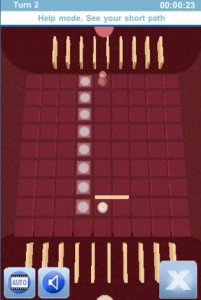 I’m compelled to give Simiula an exuberant high five for allowing everyone to use their iTunes library while playing, especially since this is a board game title. Without it, the game is almost hauntingly quiet, with little more than a ping after placing a fence in front of an opponent’s disappointed pawn. Whip up a quick playlist before taking on Quoridor, and your satisfaction will drastically improve.

Quoridor’s interface features a few buttons laced around the bottom of the screen for moving your pawn or hammering in another fence. Select the desired move, and choose where to hopefully advance to eventual glory. While this appears easy enough on the surface, placing roadblocks can become unnecessarily annoying, as the game never seems to hit the target correctly on the first try, requiring players to click repeatedly while struggling to reach the desired spot. There’s an overall lack of smoothness, as everything seems delayed and slow, creating a molasses-like gameplay experience. 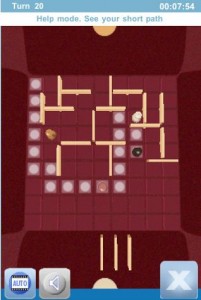 Although a great concept on the surface, Simiula’s execution is slightly off the mark in enough areas to negatively impact the player’s experience. Some people might find the AI too easily bested, but there should be enough for most people to achieve a decent sense of what the original game is like. Possibly after a couple updates, Quoridor will begin to ring slightly truer, but for now this is about as stiff as the board I played on while I was a kid.