If you have read any of my previous reviews dealing with matching games, you know that I usually don’t care for them.  In fact, Match 3 and 4 games are the bane of my existence.  That’s why it’s so surprising when a game like Flipstones comes around.  Though there is a great deal of matching to do, the unique way you do it makes it a great deal of fun.  Unfortunately, this game is not without its problems. 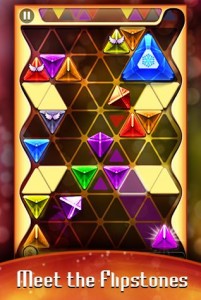 In Flipstones, each play piece is a triangle.  Your job is to bring these smaller triangles together to create larger triangles or hexagons composed of a single color.  In order to accomplish this, you have the ability to drag a triangle across the entire playing field.  The game comes with two different modes; Challenge and Endless.  In Challenge, there are a ton of levels and in each level, 4 sub-levels.  Each sub-level comes with its own goals/rules for that play session.  In Endless mode you move through levels as well but a few new components are also thrown in that make for a good time.

The actual gameplay, regardless of which mode you pick, is distinct.  Once you move the necessary triangles together to form a larger triangle or hexagon, they transform into a single shape.  When this happens, depending on the color of the shape you created, several things can happen when you tap your new creation.  For example, if your shape is yellow, it will destroy several of the other triangles on the board (a good thing).  Each of the other colors has different characteristics that will help you move to the next level.  Quite a bit of strategy gets thrown into the mix because you need to create as fast as possible but it’s important to make wise decisions regarding which colors to use. 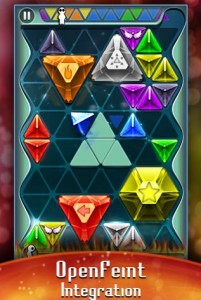 One of the problems with this system is that in the majority of the game, you will be racing as fast as you can to complete objects.  All the while, new triangle pieces are flooding your game board.  Depending on the level, the influx of new game pieces may be a continuous stream, a timed bulge or pushed in after you have moved the existing game pieces around a certain distance.  When they continuously flood in, it makes it extremely difficult for any strategy to be possible.  A bigger problem still, on one of the sub-levels (level 3, sublevel 4), I encountered a bug that didn’t allow me to go forward at all.  It flooded my playing field immediately upon loading and caused me to lose.  This bug kills the Challenge mode until it is fixed (This was on my iPhone 4).

The Endless mode is much more to my liking.  The reason being, you have an endless amount of time to make a move.  The key is to make moves that are as close to each other as possible.  The further you move a piece, the quicker the board is flooded by an influx of more game pieces.  This mode also adds game pieces that are able to fly across the board directly to where you want them to go.  Those pieces can be used a single time (for flight) and then afterwards work like regular game pieces.

The graphics within the game are quite nice.  Each shape is colorful and shiny.  That being said, its graphics won’t necessarily wow your friends.  The sound within the game is nice…at first.  After a while it gets progressively more annoying.  Each piece sounds like a wind chime upon moving it.  The music is the same way.  While you can turn it off, you can’t listen to your own music during the game – a major disappointment!  Any game that wants me to play it for hours and has only a single song needs to give me the ability to listen to my own music. 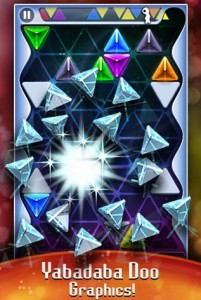 All in all, this game is another nice offering for PressOK Entertainment.  The unique gameplay of Flipstones injects some much needed color into the tired matching category of puzzle games.  That being said, until that bug that kills the Challenge mode is fixed, I cannot recommend it (once this is fixed, I will add an entire point to the overall score).  Hopefully along with the bug fix, they add the ability to listen to your own catalog of music.  I mean come on guys, its 2010 and you are playing the game on a music player.    Finally, one additional feature that is sorely missed; you cannot save the game on a sub-level.  This needs to be fixed right away.  There is no need to make people replay certain levels ad nauseam because they received a phone call or text during play.