SimCity Deluxe offers a bunch of additions over its predecessor that brings this version much closer Simcity 4 on the PC or Mac.  The graphics, along with the functionality, have been upgraded and really add to the longevity of the gameplay.  If you never played the first version of SimCity on the iPhone and iPod Touch, you missed out on a pretty good game.  That being said, this version is really a whole lot better.  Still, it will likely be a tough decision for some of you that purchased the first edition.  While obvious improvements have been made across the board, it’s no SimCity 5. 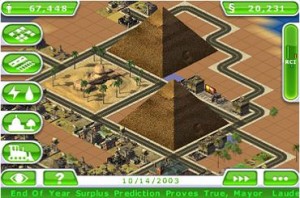 One of the first things you’ll notice upon loading the game is the graphics.  They have been undeniably improved over the App Store’s first SimCity and refuse to blur or get pixilated as you zoom in on your burgeoning city.  The sounds and music you love are here including favorites straight out of the SimCity 4 Mac and PC game.  You’ll also be able to include landmarks from around the world throughout your city.  Some may say it is a bit silly that Sharpville (my city) could have the Arc de Triumph within its border but hey – it’s my game. 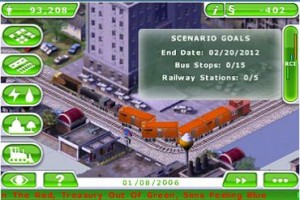 The game also ships with seven additional scenarios including staging your own Olympic-type games and dealing with disasters.  Finally, you’ll get 7 “starter” cities to play with which is great if you aren’t really sure where to begin and want to get a feel for how things work.  They are also great to just straight destroy with disasters.  As mayor, you’ll have the ability to throw disasters at your city including fire and the oft-used alien invasion.  One last addition, SimCity Deluxe ships with all 4 weather seasons. Each brings about a different landscape for your city including snow on the ground and green in the spring. 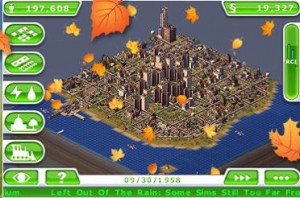 Going back to the original App Store version, it’s easy to feel the difference in the games controls and responsiveness.  Still, for $6.99 these additions may not be enough for people who bought the game the first time around.  Indeed, several people may be upset that these improvements didn’t come as a free addition or at the most, an in-game upgrade for a few bucks.  One thing is for sure, if you never purchased the first one and you are a fan of the SimCity series, it’s time to take the plunge.  This version is simply delicious fun that is guaranteed to please for hours on end.