Gameloft’s newest effort, NFL 2011, falls fall short of my expectations when it comes to progressing from the game’s first iteration.  That being said, can it stand on its own as a good football game in its own right despite its lack of progress since its inaugural version in 2009?  Unfortunately no.  This game fails as both an upgrade and a football game in quite a few ways, many of which are fixable but likely won’t be. 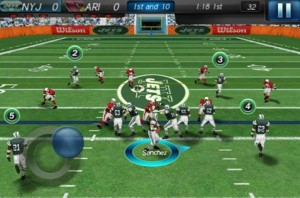 There’s no doubt that the graphics have been upgraded since last years NFL 2010 and the rosters have been as well – as well as rosters can be upgraded 3 months before the season starts.  That’s about it.  You’ll see a few new additions here and there but the second generation of a game, especially in a genre as competitive as sports, needs to really show a decent improvement, and you just won’t find it here.  The game displays poor realism throughout and unfortunately poor arcade action as well.  If it picked one or the other it would have a better fit but instead it’s left in a limbo between each extreme.

The presentation is also lacking in almost every way.  What’s the point of an NFL license if the announcer in the game doesn’t even say their names and the names are too hard to read while playing?  After every single play you’ll get to (read: have to) watch a reaction from a player on the field.  It becomes incredibly annoying and stalls the game play to where the game feels much too long.  Suffice to say, it’s jarring to see Peyton Manning jump up and down and show off his swagger after throwing a touchdown pass. 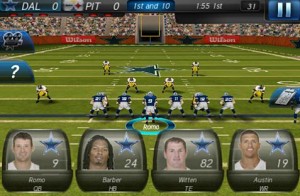 Speaking of which, there is basically no difference at all in the skillset of Peyton Manning and someone like Matthew Stafford.  Stafford will still be able to throw perfectly accurate 50 yard passes despite his lower rating.  No matter who you quarterback with you will have as long as you like in the pocket.  Seriously, even if you just stand there, the defense will not get through.  It’s embarrassing. 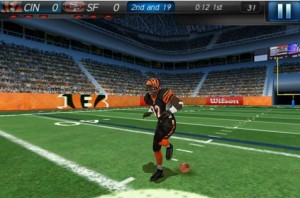 The game still offers nothing more than the same modes as last year.  No multiplayer, no franchise mode (just a single season mode) and no player mode (like you might see on a console game of this type).  The lack of upgrades along with the poor realism makes this game a poor step forward for the series.  Gameloft spends there time making games that are close to their console brethren because those developers don’t spend the resources to make a mobile game.  That isn’t going to fly in this case as last year’s Madden is a much better experience.  Pass on this year’s and hope for the best next year.