Perhaps no series in game history has done as much two step forward, one step back taking as the Madden football series that is released every year for nearly every system.  Madden NFL 11 makes the second Madden series appearance on the iPhone and I extremely pleased to say that it does not take any steps back; instead is drives itself forward for a first down.  A blend of updated graphics, dynamic ai, and realistic game play really make this a must buy for those mobile football gaming fans.  It also puts to shame Gameloft’s latest attempt at a rival mobile franchise, NFL 2011. 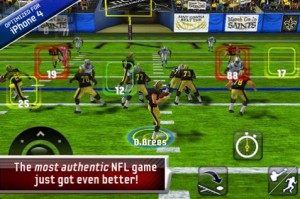 If you read my recent review of Gameloft’s game, you saw that I was pretty unhappy with it in a lot of ways.  Its dismal logic, poor presentation and unrealistic ai were maddening for me.  Madden steps up in the pocket in all three categories and the new editions to the gameplay really result in a much better representation of real football.  This year, Madden added a new feature to all of its iterations called Gameflow.  The idea is that the sideline coach calls all of your offensive and defensive plays; you get a quick look before the play starts and away you go.  Gameflow is a perfect fit for the iPhone and I’ll tell you why; nothing is more annoying than play calling on a touch based screen.  3 plays at a time, scrolling through slowly is incredibly annoying.  Luckily for those hardcore iPhone players (do they exist?), that option is still available.  However, Gameflow speeds up the gameplay significantly.

Now this feature isn’t without a few issues here and there.  Clock management is where you see the biggest problems.  I had a situation arise where I was using Gameflow and my team lined up at the 2 yard line for a field goal even though there were 8 seconds to go.  My team had 2 timeouts but the sideline coach wanted to kick a field goal instead of running a quick play.  That was annoying.  That being said, Gameflow gets you running plays that you would likely never find/use if you picked your plays manually.

The ai is obviously improved over last year’s game although when I first started playing it didn’t look obvious, it looked extremely easy.  That was due to the default game being played at rookie mode.  Skip that and turn it up a notch to Pro.  I promise you will have a lot more fun.  You’ll see sacks, interceptions and players that are much closer to their real life counterparts that Gameloft’s NFL 2011.  Peyton Manning makes the big throws but if you’re playing with Jon Kitna, you can tell the difference. 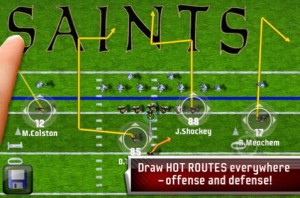 Other noticeable additions include a 50 man roster, the ability to get free roster updates throughout the year (!), penalties within the game, real life stadiums (all modeled and realistic looking), and a ton of other things that help to make football, football.  Finally, the game gives you some basic multiplayer over a Bluetooth connection.

The graphics on my iPhone 4 are substantially higher quality than last year’s App Store Madden.  Having said that, I’m not sure what kind of upgrade you’ll see on one of Apple’s older device models.  The animation is generally smooth throughout gameplay but you will notice some stuttering from time to time.  The commentary within the game is done by John Madden and Cris Collingsworth and though it’s nice to hear Madden back in a Madden game, you’ll hear both announcers say the same things all too often.  The crowd noise is nice and some of the hits really have a nice bone rattling sound attached, but overall the sound is nothing special with one caveat – the music.  The music is fantastic and really adds to the polish of the game. 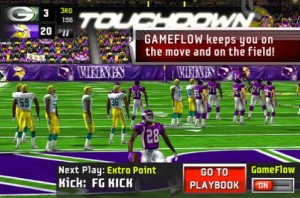 There are a ton of things I really wish were included in this year’s version.  The big one is obvious – Franchise mode.  Unfortunately we are left being able to play just a single season.  I’ll let it go this year but next year it darn well better be there.  Other missing items include online multiplayer and more statistics.  That being said, for a mobile game in its second year, Madden has really made a solid effort.  It’s no contest at all which football game should be on your device this year and at $7.99 it’s not going to break the bank.