Searching for the next in depth iPhone or iPod Touch game, chock full of levels, music, unique characters, power ups, and various attacks? Looking for a massive story line, reminiscent of a Final Fantasy title, rich in multiple character arcs and a literal library of enemies and scenarios? Well, Just 1 Level surely isn’t it. But before we all go bashing the next release from Dragosaurus, let’s take a much closer look. 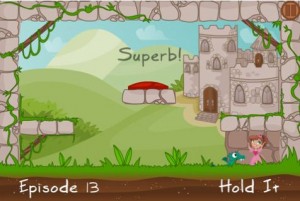 Instead of attempting to compete with other titles by overloading themselves with too much unpolished content, Dragosaurus generated one level, which changes each time, requiring players to figure out the constantly varied controls. Set in medieval times, Dennis the dragon must solve each puzzle to unlock the Princess and save the day. With 60 unique levels, a rotating soundtrack, and the ability to use your own iTunes playlist, Just 1 Level can become surprisingly entertaining for a relatively simple title.

Rendered in a soft, cartoony glow, Dennis bounds across the screen, attempting to land on the giant red push button to hopefully free the lovely Princess. The 60 levels are separated by seasons, which alter the backdrop, similar to a skin for a music player such as Winamp. Ranging from blustery fall days to bursting spring mornings, Just 1 Level grows with the seasons as the challenges become increasingly difficult. After successfully completely a level, white bubbly font exclaims words of encouragement such as “Superb” or “Bodacious.” 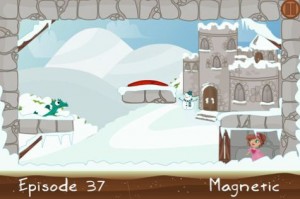 There isn’t anything particularly striking about the sound effects, especially since there really aren’t any. A catchy little diddly plays after solving a puzzle, but other than that, this is primarily driven by the cutesy, catchy soundtrack which emits from your device’s speakers. Ranging from acoustic guitar playing, hand clapping folk songs, to bumping electronic tracks, Just 1 Level rotates quickly through the music to keep people entertained. Of course, when you become bored of this, flip over to the options and toss on your favorite iTunes playlist.

Just 1 Level is completely based upon varying control quandaries, which Dragosaurus executed with near perfect precision. Each level has a unique mechanism to discover, whether it’s tilting the device, timing issues, or completely backwards, there’s a surprising amount of tough puzzles to solve. Some of the floating levels can become a little annoying, but usually the control difficulties are created by the user, and not by the developers. 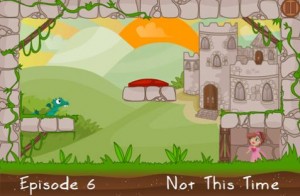 While the concept might sound lackluster, Just 1 Level is strikingly entertaining, and far more challenging than you might initially think. For $0.99, this is a sure-fire “bang for your buck” title which utilizes its simplistic qualities to its advantage, instead of ballooning into an overcrowded game with meaningless content.