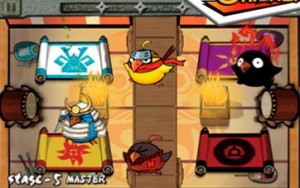 As Ninja Chicken progresses, a conveyer belt loaded up with assorted chickens, pigs, and robots sails by as you attempt to place each bird on the correct platform. Avoid touching the evil mechanical chickens, while tossing the pigs aside, and slowly collect points, crystals, along with other items. The colored pads will switch positions, as the conveyer belt speeds up, increasing the difficulty exponentially as the levels progress, until it’s nearly all out tap and drag chaos.

The gameplay is laid out nicely, with the wooden brown conveying system running through the middle, as the colored spaces are placed on different sides. The assorted characters adorn unique costumes and weaponry, dancing and disappearing after landing on a correct space. Enemy pigs and robots glare with evil glowing red eyes and angry scowls, as you attempt to avoid them while snatching up each fellow ninja chicken. The interface for the menus is also slick, separating each section and presenting the extensive modes and difficulty settings. 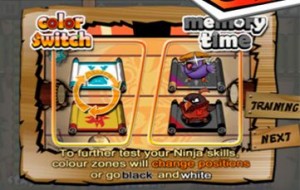 Energetic tunes flow through each level, which seem to reflect the intensity of the speedy gameplay. This also reminds me a little of games such as Crash Bandicoot for some reason, smacking of funky, fun tunes from platform games of the past. The assorted ninja warriors cry out various bird-like sound effects after each successful move, while a low pitched drum signals a missed attempt. Between the bird calls and crazy soundtrack, Ninja Chickens pumps out a wall of sound while playing.

Touch and drag. If you can handle this, you can handle Ninja Chickens. Of course, when there are four different colors to match up and multiple enemies to avoid, this can become way tougher than it sounds, but the controls manage to help more than hurt the smooth action. 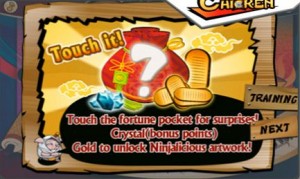 Titles like this are always a conundrum, because Kongzhong Corporation executed everything pretty well, but the overall concept of the game just isn’t all that entertaining. While decent graphics, sound, and control can aid in a title’s performance, if the actual play is about as exciting as a chess match, it’s pretty tough to keep people coming back. Ninja Chickens is worth a shot, but I can’t justify the $1.99 when there are plenty of other games for $0.99 which kept me playing five times longer.