I scream, you scream, we all scream for…puzzle games? Itchy Mitshi is here to serve up the latest color coded conundrum, taking cues from some obvious all time classics while spicing things up with a little flair and icy smooth graphics. Three game modes, three difficulty levels, Openfeint support, and a boatload of mind bending unlockable achievements are all here for the taking for a cool $1.99. 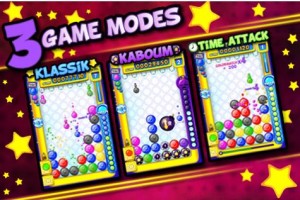 An obvious advantage for this title is the inclusion of multiple modes, each containing its own standalone set of rules. “Klassik” is somewhat of a half-breed between Tetris and Bejeweled, requiring you to match up colors without allowing the shiny orbs to reach the top; otherwise it’s the inevitable “Game Over.” Each sphere can be matched in a variety of methods, allowing players to be far more experimental than the rigid constraints of Tetris, including “L” shapes and zig zags. “Kaboum” mode is similar, but sticks the player with an increasing amount of special targets which can only be destroyed by matching up a specifically designed exploding bomb. Finally, “Time Attack” is exactly as it sounds; race against the clock like a chicken with its head cut off to score a bazillion points.

Right off the bat, Ponk has an appealing, soft, yet vibrant look to it, with the menu options all presented in cartoony, fun block lettering. The colored orbs leave little bubbly trails behind them, bursting into specks after a successful color match. During “Kaboum” mode, bomb pieces are labeled with an ominous skull and crossbones, while other special surprises might have rainbows or other symbols emblazoned across their colored background. A variety of options are carefully placed around the border, including a pause option, a chargeable meter which dispenses special orbs, a button for requesting more balls, and your current score. 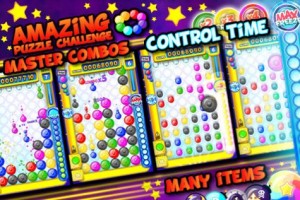 There’s plenty of quirky, electronic popping and snapping sounds while playing through the levels, including some interesting bells and chimes as time goes on. The soundtrack is similar, highly snyth and techno driven, but still manages to somehow stay pretty catchy, even after a couple times through. This is probably a glitch, but occasionally Ponk’s background music disappears in between stages, then coming back during another.

One of the most unique aspects of Itchy Mitshi’s latest title is the ability to move the balls wherever you want until they make contact towards the bottom, making combos and bonus points even more versatile. The control system attempts to make this as painless as possible, and passes with flying colors. Without making the process completely liquid smooth, this game would become an absolute disaster, and thankfully the developers deliver in spades. 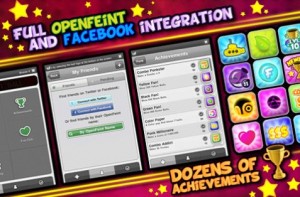 While it’s definitely not my favorite puzzle title, Ponk is still some quality gaming for a fairly cheap price. The assorted modes and difficulty levels help to mix the action up and keep the game fresh, although it seems like the sound could use a slight tweaking. Pick this one up and start comboing your brains out!