Does anyone remember the show Supermarket Sweep? A wholesome half hour filled with crazed people running around like a herd of wild animals through a supermarket, swiping items off the shelves while desperately loading the carts as fast as humanly possible. Supermarket Mania is almost the same thing, except you take on the stressful role of Nikki, the clerk assigned to stocking the shelves, yelling at teenagers, preventing theft, and of course, cleaning up after people when they throw garbage on the floor. 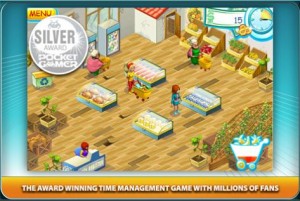 Upon first glance, I was beyond skeptical about the overall concept of this title and its potential ability to hold gamers’ shaky attention spans for longer than three minutes at a time. Within about five minutes, I was surprisingly hooked on Supermarket Mania, unable to put my iTouch down while blasting through the levels. Honestly, the shockingly addictive gameplay, while be it simple, runs crystal clear and silky smooth, with a minimum amount of hiccups and annoyances.

Each store contains its own unique set up and designs, dotted with grocery shelves, ice cream freezers, coolers, and produce stands. The sprites are small, but rendered in 3D, which tends to make them pop out from the somewhat flatter backdrop. Each of the seven customers is completely different, along with the dozen assorted sellable products, allowing players to cleanly discern each type from the other. All of the customers have their own tendencies, preferences, and patience levels, which require your attention before they become irritated, throw their shopping bags on the floor, and storm out in a fit. 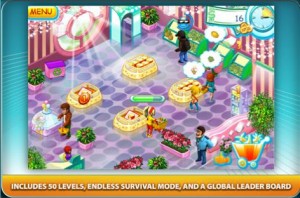 Short of some assorted pings, giggles, and yelling, there aren’t many noticeable sound effects while working your way through Supermarket Mania, minus the shrill scream of the security guard’s whistle. The soundtrack endlessly plays a handful of light hearted, bouncy tracks over and over, only subsiding when the store closes, which cues up another repetitive song as customers grab any last minute items. If the gameplay wasn’t so curiously infectious, I might have shut this one down due to the frankly annoying music.

This title rests upon plenty of clicking on specific fruit stands or coolers, which is about as consistent as any other game on the market. Feel free to tap a number of items in succession, which sends Nikki into a tizzy, hitting each target as quickly as possible. The only occasional fly in the ointment is your trusty security guard, Mr. Barefist, who requires constant tapping to prevent teenagers from knocking items off the shelves and thieves from robbing you blind. Tending to him quickly becomes tiresome, and sometimes it seems to require a few taps before he blows the whistle. 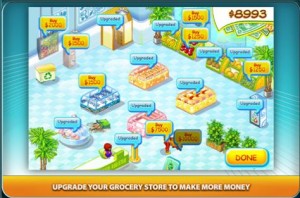 Supermarket Mania is clearly a pleasant surprise, capable of pulling gamers in for much longer than initially expected. Without some of the annoying sound effects and weak soundtrack, this could be even better. Thankfully though, that’s what the volume controls are for.