So with iOS 4.1’s release, the public got its first glance at Apple’s iPod Touch and iPhone Game Center.  The Game Center is a new built-in app you will find upon loading up your iDevice while using 4.1 for the first time.  My thought upon loading it for the first time was something between dumbstruck and bemused.  It has a tenth of the ability of OpenFeint right now and its interface is really annoying.  What are we supposed to do with this?  I understand the idea of trying to bring multiple social networks together under one banner platform but this first release is nothing if not forgettable. 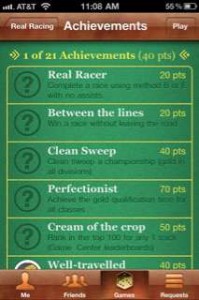 Go ahead and load it up.  The first thing you’ll notice is that is asks you for the same username and password you use for the App Store.  This is the first place it went wrong.  Seriously, we’re not buying items through this app.  Stop inundating us with logins and passwords for every single thing I do on my phone.  It’s not like using the keyboard to type out an oft-used password is such a pleasure.  If anything, it’s a downright annoyance.  When it does load you’ll see a very basic screen with a few options, one of which is a tab to see your friends.  Touching it for the first time shows you a list full of – well -nothing.  You won’t see any friends without adding them.  On OpenFeint you can simply give it your Facebook or Twitter id and it will find all of the people that are connected to you via either of those two networks to invite as a friend.  That’s not the case here.  Each and every friend must be added by username or email address.  Oh yeah, there’s also no way to search.  Seriously Apple?  I thought your software was supposed to make things easier.

Then try clicking on Games.  It should show a list of all the games that Game Center supports.  Instead on my device, despite the fact that I have several Game Center supported games on my iPhone 4, it shows none at all.  It does have a button that will show you some games that are supported from the App Store.  When clicking it I found several games including Real Racing that were already on my device. [Editor: After writing this I later found out that you had to open up the supported games before they are shown on the Game Center interface.]

Honestly, the iPhone Game Center is a demonstration of Apple falling on its face.  It’s worse in almost every conceivable way from the countless other social networks for the iPhone and iPod Touch.  In an effort to override those popular gaming centers, Apple shows that they lack the basic understanding of what made them so successful – ease of use.  If there is any justice in the world, Game Center will fail as quickly as one of Google ill-fated social networks like Google Wave.