Have you ever had a problem that only jumping from roof to roof, shimmying up poles, fences and buildings could solve?  Well the future has a lot of them.  Your job in Mirror’s Edge utilizes all of these abilities and more to take a parkour-style fight to the oppressive man.  There is a story but I guarantee that no one pays attention to it.  Instead, once thrust into the dystopian future filled with gorgeous, clean lines and graphics you’ll be on a personal quest to move as fast as you can.  Unfortunately the journey is over all too quickly. 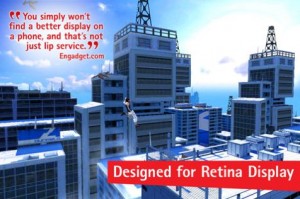 Mirror’s Edge has been promised as a soon to be released title on the iPhone and iPod Touch for years – literally.  In late August that release finally came to fruition.  EA Mobile did a lot of things right with the game – one of which is that the controls are actually usable.  Usable controls are no small task for a game that has you play a character that jump from building to build, climbs up walls, take out defending guards, and the like.  In fact, the control issues alone probably led to the long delay in the game’s release.  Fortunately these are handled fairly well with a series of on screen movements that the game teaches you in the early stages.  And while they are easy to learn, they are difficult to master.

The campaign is the brunt of the game.  In every way (except simplicity), the gameplay is an upgrade over something like Canabalt.  In that game you merely needed to time your jumps correctly and while it was a brilliantly done iPhone and iPod Touch Flash port, Mirror’s Edge offers much more.  Mainly that along the way, you’ll find obstacles that will have to be maneuvered with care.  You’ll also find stages you need to run entirely right to left – a seemingly mundane difference that really requires some care because so few 2d games move in this direction. 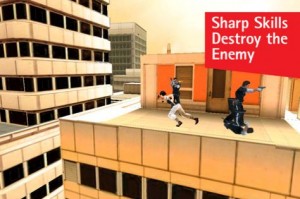 Unfortunately, this game has other difficulties besides it short length (the main campaign lasts no more than 2 hours).  One of the difficulties is that the game offers up an end boss that is worse than Bowser in the original Super Mario.  I won’t ruin (in italics for notate sarcasm) it for you but suffice to say at the end of the game you will be thinking, “What the hell was that?”  It is so unlike the rest of the game and really doesn’t fit at all. 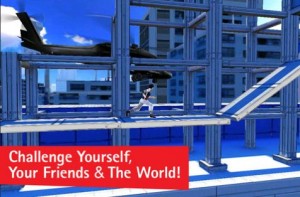 The sound within the game is a mixed bag.  In my estimate, no game in the last few years has had a better fitting main theme song than Mirror’s Edge.  That being said, the rest of the music within the game is entirely forgettable.  The voices, gun shots, and yells throughout are also nothing special.

In the end you’ll find yourself wanting more from a game that costs 5 dollars.  While there is a timed trial mode where you can re-run each level as fast as you can and the ability to try and collect hidden bags throughout each level, it really didn’t add much to my enjoyment of the game.  That all being said, if you are looking for a great looking game with fast paced action, Mirror’s Edge still meets your needs quite nicely.  Just don’t expect to be playing it a month from now.